Moonshadows restaurant in Malibu was closed Thursday as workers mourned the loss of the establishment's owner Andrea Bullo and his son, who were killed in a fiery crash in Woodland Hills.

LOS ANGELES - Moonshadows Malibu owner Andrea Bullo and his 13-year-old son, Marco, were the victims of a fiery crash involving a suspected DUI driver in Woodland Hills, employees of the restaurant confirmed to FOX 11.

The coroner has not officially released their identities, listing both of the deceased victims as "John Doe."

First responders were called to the intersection of West Mulholland and San Feliciano drives around 9 p.m. Tuesday night.

Los Angeles Police Department investigators said the father and son were driving in a Ford Mustang eastbound on Mulholland Drive when their vehicle was hit by a Toyota Camry that was traveling at a high rate of speed. The impact was so strong, both vehicles were pushed into the intersection and immediately caught fire.

At least two people are dead after a fiery crash in Woodland Hills.

The 60-year-old restaurant owner and teen son were pronounced dead at the scene by authorities. 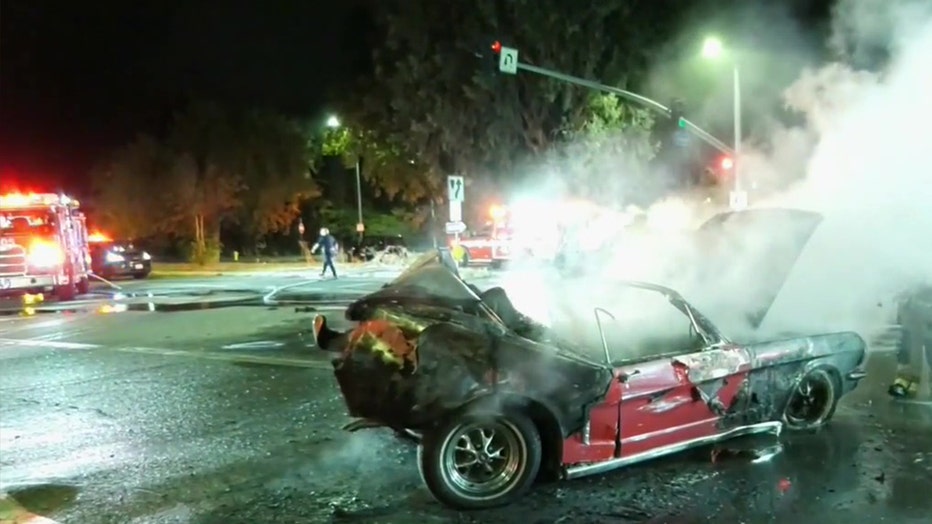 Firefighters extinguish a Mustang that caught fire after being rear-ended by another vehicle on West Mulholland Drive in Woodland Hills on Nov. 1, 2022. (FOX 11)

The driver of the Camry, identified as 21-year-old Kevin Gonzalez, failed a sobriety test and was taken to the hospital for his injuries sustained in the crash. After the was released from the hospital, he was arrested on a DUI charge.

Gonzalez is currently being held on a $4 million bond.

Moonshadows Malibu is a celebrity hot spot with stunning views overlooking the Pacific Ocean serving up Asian fusion, Italian and American dishes. The beachside establishment was closed on Wednesday and Thursday.

"Andrea will be truly missed. A unique friend, father,-and figure to follow. He will be irreplaceable," Moonshadows said in a statement to FOX 11.

According to the restaurant’s website, Bullo is originally from Venice, Italy where he found his passion for the culinary arts. He opened Moonshadows Malibu with his friends Rodolfo Costella and Franco Simplicio in 2001.

Moonshadows has received numerous awards through the years including the Wine Spectator’s Award of Excellence, the Michelin Award, and was voted one of Yelp’s Top 100 restaurants in 2022.