The new city rule has generated positive reviews from most employees. However, one city councilman is hoping to put a stop to vaccine stickers.

Another city employee Tanya Kresback says, "I like it… makes me feel safe where I work and I feel comfortable enough to work around my peers."

We are talking about little round yellow stickers that say "FULLY VACCINATED." 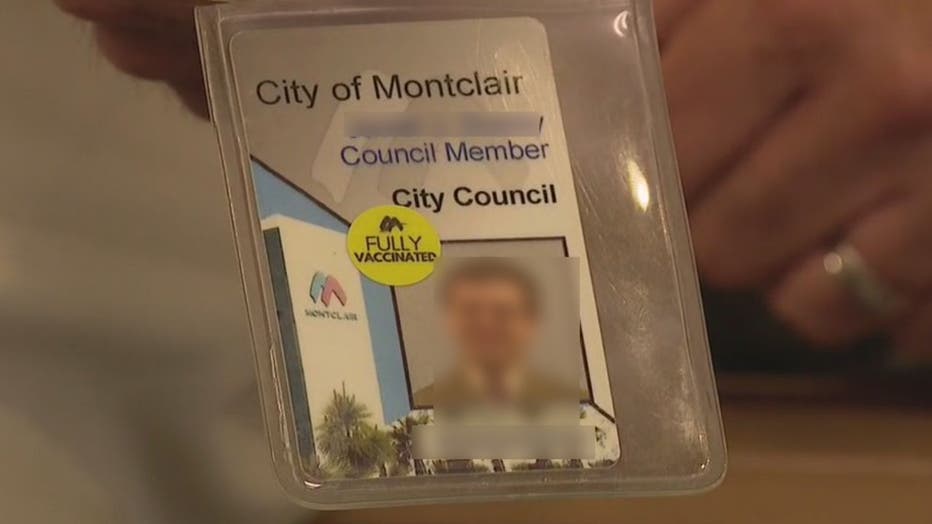 At Montclair City Hall workers are being given a chance to wear the stickers if they have been vaccinated in order to avoid wearing a mask all day at work.

PREVIOUS COVERAGE: Montclair city employees asked to wear stickers to prove vaccination if they want to ditch masks on the job

Mayor John Dutrey proudly sports his sticker on his city identification card. He says most people seem to be embracing the sticker policy. He says,

"I have not received any complaint from any staff member, residents nor am I aware of any grievances through our bargaining associations or any that employees filed," Dutrey said.

Councilman Ben Lopez though has raised concerns; at the last council meeting when he said publicly, "I have some reservations because the policy, in my opinion, is not vetted by the council. I think the policy treads on some serious legal concerns on issues of privacy."

During an interview with FOX 11, he added that he wanted to get rid of the stickers and he’d try to find other council members who might share his concerns in an effort to fight back.

But, the mayor says he says Councilman Lopez has "No factual evidence. Nothing to back it up. I believe the next council meeting we’ll have a closed session where we can go into personnel discussion to determine if we have any employees… any litigation… any Cal/OSHA complaints."

Meanwhile, the city’s Director of Administrative Services and Human Resources Jon Hamilton says, "Employees seem to be embracing the program. I’ve received zero formal complaints either from an employee or one of the employee associations."

His comments come as Councilman Ben Lopez vows to fight to stop the sticker program.