Three-year-old Noah Connally's parents got bad news in Boston, where they thought the toddler would receive lifesaving heart surgery.

SANTA ANA, Calif. - An Orange County couple is in a fight with their insurer over a special surgery for their young son.

Noah Connally is about to turn four years old and has spent much of his young life in and out of hospitals. Noah was born with half a heart, a condition known as hypoplastic left heart syndrome.

Sean and Niccole Connally learned of a pioneering surgery at Boston Children's Hospital but were informed by their insurance company Anthem Blue Cross of California that the Boston in hospital is not within network.  With a request for coverage denied the family is unable to afford the one-million dollar procedure.

The plan was for Noah to undergo biventricular repair heart surgery at Boston Children's Hospital to give him two working ventricles. But the surgery was canceled after tests by the hospital revealed he was not a suitable candidate.

Hours of testing Wednesday showed Noah's heart was too badly deteriorated on the one side to move forward with the 10-hour-long, million-dollar procedure.

"It brought the risk level of the surgery up tremendously, and it's an already risky procedure,'' said Niccole Connally, Noah's mother.

Noah suffers from hypoplastic left heart syndrome. The left side of his heart cannot effectively pump blood to his body, so only half of his heart is fully formed. 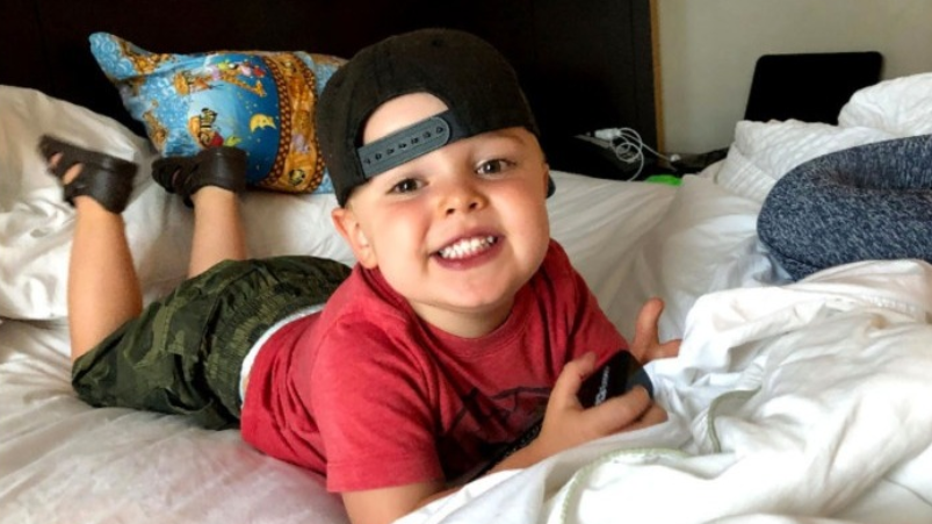 The child looks perfect. But "Noah only operates on 80% oxygen. We feed him primarily through a G-tube. He's limited in his speech, clearly because he's not getting 100% oxygen. He's delayed in other areas,'' his mother said.

Noah's parents, both teachers, came to Boston from their home in Orange County so Noah could undergo life-saving surgery at Boston Children's Hospital. The surgery was not offered in California and his family and doctors initially thought it would give Noah Connally the chance to live what his parents call a "typical" life.

Doctors in Boston agree it's safest now for Noah to return home to California and have a procedure that will force him to rely on his one healthy ventricle.

"Hours before we left for our trip to come here last week, we got a call saying that you have not been preauthorized," said Sean Connally, the child's father. An additional appeal was denied, but the family pushed forward.

During their interview with FOX 11 Noah squirmed and cried after a long day of tests at the hospital in Boston. Mom Niccole cradled her son and tried to offer comfort. Both parents are teachers and have received a lot of support on their GoFundMe page.

Anthem Blue Cross will cover another procedure but Noah's father says it still leaves him with half a heart, results in more complications, and the need for a possible heart transplant down the road.

A company spokesperson for Anthem Blue Cross sent out his statement:

“We cannot comment on the specifics of this case due to privacy laws unless authorized by the member. Anthem Blue Cross of California is committed to providing our members with access to quality and affordable health care services and support to help manage their health needs. Anthem Blue Cross’ provider network in California includes many nationally recognized facilities that excel in treating patients with challenging, highly-complex medical needs. This includes several renowned facilities such as Children’s Hospital of Los Angeles, Rady Children’s Hospital in San Diego, and Lucile Packard Children’s Hospital at Stanford.”