MeowTalk will allow owners to communicate with feline friends

MeowTalk is a new app that allows cat owners to understand their cats moods through their meows and vocalizations.

BELLEVUE, Wash. - If cats could talk, what would they say? Javier Sanchez, a former Amazon engineer who worked on Alexa, created “MeowTalk,” a cat translation app, in a bid to answer that age-old question.

“I came across some articles that showed data and the science behind cats having their vocabularies,” Sanchez said.

The gears in Sanchez’s head started to turn and he came up with the idea to create an app that could help owners communicate with their cats.

Sanchez used the acumen he developed while managing large projects for Amazon to create MeowTalk.

“That’s when the idea came to me that you know, you can make an app on this. I was fresh off the heels at my job at Alexa where I had gone through this whole process with them, managing projects that scaled much larger and were tackling human voice recognition. So I knew the science was there to do this,” Sanchez said. 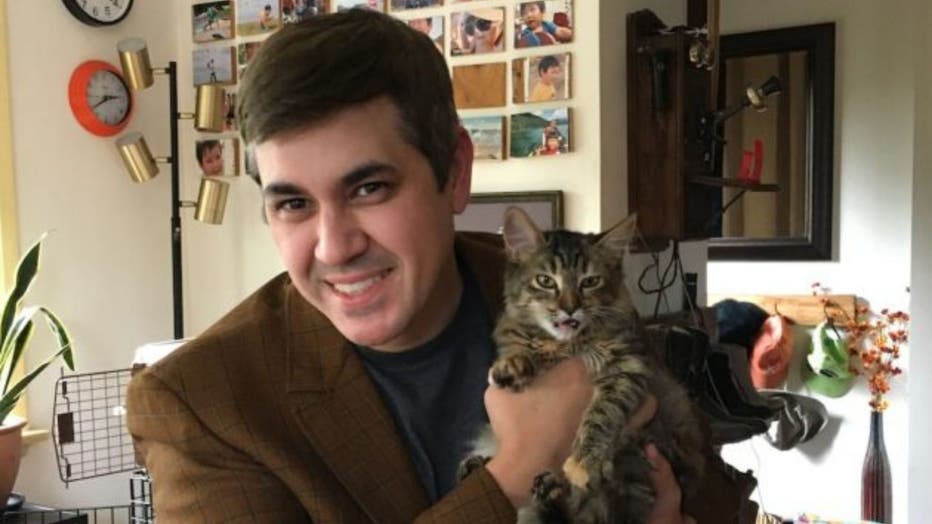 Javier Sanchez, creator of MeowTalk, and his kitten, Mittens.

Sanchez and his team found through research that cats have unique meows to relay nine different messages to their owners. MeowTalk aims to decode the meows and translate them into phrases that humans can understand.

It wasn’t until earlier this year that his idea really began to take shape.

On a webinar in late September, Sanchez said that social distancing due to the coronavirus pandemic has made the utility of MeowTalk even more relevant to cat owners.

With many people home alone with their pets, Sanchez said he hopes that the technology will allow owners to communicate with their cats and build an important connection that may otherwise be unavailable given the circumstances.

The app has about nine responses that are “general for all cats,” according to Sanchez.

“These are not their words. What this will detect is states of mind, the moods that a cat can have. It’s based on very real science how certain types of cat vocalization, because they’re not all meows, can align with these different sort of intents,” Sanchez said.

Some examples of responses could be happy, which is a neutral response. Then there’s defensive, calling their owner, pain, resting, etc.

“The cats aren’t limited to nine, we don’t know how many they have,” Sanchez said. “But it’s more than nine.”

The app learns as it goes, Sanchez said.

MeowTalk testing with Mittens the kitten

Javier Sanchez, MeowTalk app creator, tests out the new technology with his own kitten, Mittens.

“Because we have a technology that we can use to recognize very specific vocal patterns of a cat, we can map that to their specific words,” Sanchez said. “So how that would work is you would do a translation, just like you normally would with the cat, you would catch the meows in the kitchen, it’s asking for food. You know it’s asking for food. Then the meow and the translation that comes back and say it’s in pain, and you know that’s not absolutely correct. But instead of saying, yes that’s correct, you can say no,” Sanchez said.

After having that same interaction a number of times, the app will remember the new vocalizations and recognize them each time. 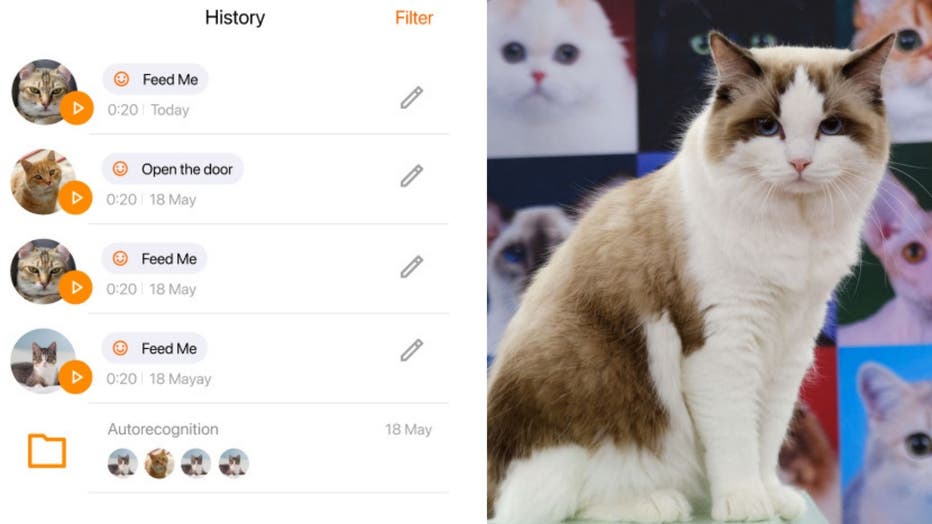 The MeowTalk app is part of a larger plan to establish deeper relationships between humans and felines, Sanchez said.“It has the ability to really change people’s lives and I’m already seeing evidence of that now,” Sanchez continued. “I’ve known going into this that COVID-19 and the social distancing requirement that has been imposed on us is making certain people have to isolate more or entirely.”

“So, they’re in their house a lot and they don’t have the same connections to other family members and friends that they normally have. Whatever the reason is, they’re basically in isolation. And many of these people have a cat and this is a very important relationship to them,” Sanchez said.

“I’m expecting us to take this technology even further than where we are now,” Sanchez said during the webinar. “My vision is a smart collar: The cat meows, you hear the voice, and it’s in context.”

Sanchez wants to be able to hear the human voice a cat could potentially have to strengthen the bond between animal and human.

While the collar is still being developed, Sanchez believes the app alone will help break barriers and open doors for a new sort of technology.

Another question to consider was whether or not this technology could work for dogs. According to Sanchez, the answer is no.

“I get that one a lot. Unfortunately, dogs just don’t have the vocal capabilities to express very unique, what I’ll call ‘words,’ but they have their barks and they have their various sounds, the whimper and other vocalizations, but it doesn’t have enough flexibility or the degree of flexibility to really call the unique things words. So, for dogs, the science and data just aren’t there,” said Sanchez.

Interestingly, crows do have the vocal flexibility, but Sanchez wasn’t sure if people would want to talk to crows or not.

“That one would be a bit harder to be successful with,” Sanchez joked.

The hurdle, for now, is creating a lightweight collar with a long battery life that does not cost an arm and a leg to make.

What started off as a personal project has now blown into a full technological endeavor, and Sanchez said they are working diligently to create what cat owners want.

“We’ve heard from our community, worldwide now, ‘We want a slick app that works all the time and does more than just translating the animals.’ We heard it. We’re working on that,” Sanchez said.

Sanchez does not have an estimated date when the collar/app combination will be ready for the public, but he and his team are working hard to get it done.

The MeowTalk is available for download on both Android and iPhones.