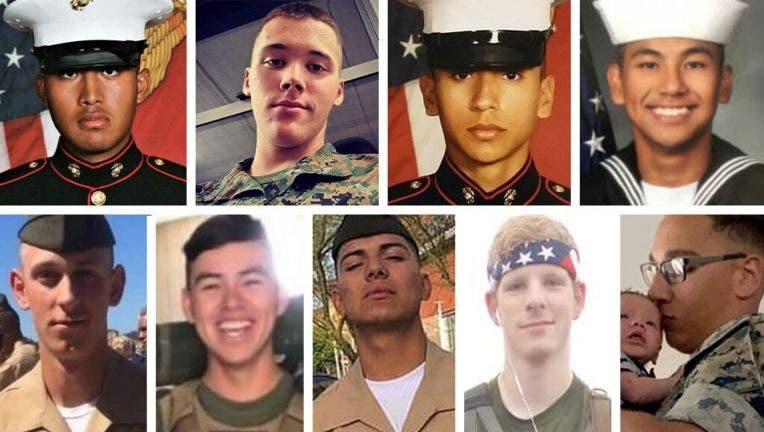 SAN DIEGO (AP) - The Marine Corps has launched a probe looking at the readiness of its troops before they participated in an exercise that ended in tragedy with the sinking of a seafaring tank off the Southern California coast that killed eight Marines and one sailor last summer, officials said Tuesday.

The announcement comes more than a week after the maritime branch released its findings that the accident July 30 off San Clemente Island was caused by inadequate training, shabby maintenance of the amphibious assault vehicles and poor judgment by commanders.

The training accident 70 miles (113 kilometers) off San Diego’s coast was one of the deadliest for the Marines in recent years. Leaders said it could have been prevented.

The Marines use the vehicles to transport troops and their equipment from Navy ships to land. The armored vehicles outfitted with machine guns and grenade launchers look like tanks as they roll ashore for beach attacks, with Marines pouring out of them to take up positions.

Marine Corps officials declined to say what prompted the unusual move to open an additional investigation, which started Friday and could lead to new disciplinary actions. A board of officers led by Lt. Gen. Carl Mundy will review the formation of the 15th Marine Expeditionary Unit at Camp Pendleton, its readiness and training and its oversight by headquarters.

An investigation report released March 25 detailed a slew of missteps and oversights that left the crew of the amphibious assault vehicle in the dark and using their cell phone lights to desperately try to find an unmarked escape hatch as they took on water.

There were also no safety boats nearby to save them.

Three commanders have been dismissed as a result, including the leader of the 15th Marine Expeditionary Unit. Seven other military personnel faced administrative or disciplinary action.

The Marine Corps announced the probe after notifying all families of those who died. Some of the families told The Washington Post they questioned why no generals were held accountable.

"Why are these men allowed to be in control of people’s lives period anymore?" Christiana Sweetwood of Danville, Virginia, whose son was among those killed, said in an interview last week with the newspaper. "No more. That’s the angry part of me speaking. Are these generals getting off and these lower-level guys taking the blame?"