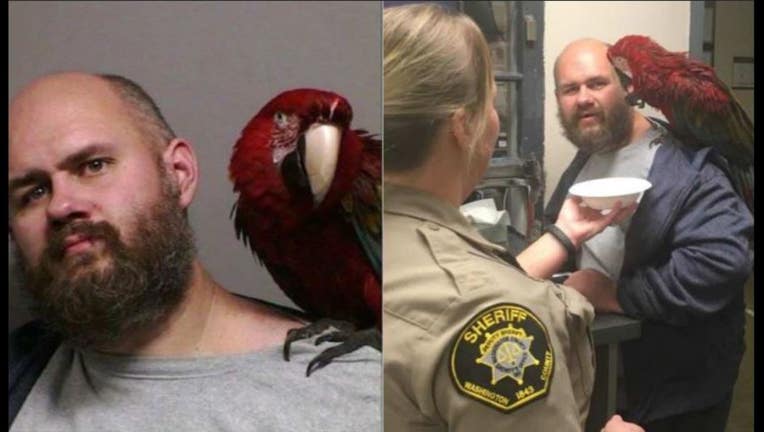 PORTLAND, Ore. (FOX 11) - A red macaw has become an internet celebrity after it appeared in a Portland man's mugshot.

The Washington County Sheriff's office said in a release that Craig Buckner, who was at the courthouse for an appearance, had placed his bird in a tree outside the courthouse to wait, thinking he wouldn't be there long.

But, Buckner was taken into custody at the appearance, and he was concerned about his 4-year-old macaw named 'Bird.'

Deputies allowed Buckner to retrieve his bird from the tree and to bring the bird inside with him to eat and be cared for.

Authorities then contacted one of Buckner's friends to come and get the bird while Buckner resolves his court case.

Deputy Shoana McKelvey, who cared for Bird during the situation said, "Our Sheriff's Office has very strong core values of doing the right thing. I also have very strong moral values of treating all people with compassion no matter what role I am taking. Mr. Buckner was already in a stressful position and did not need the additional stress and worry of his loved pet, Bird! Bringing the two together brought me joy and brought relief to Mr. Buckner and safety to his bird."