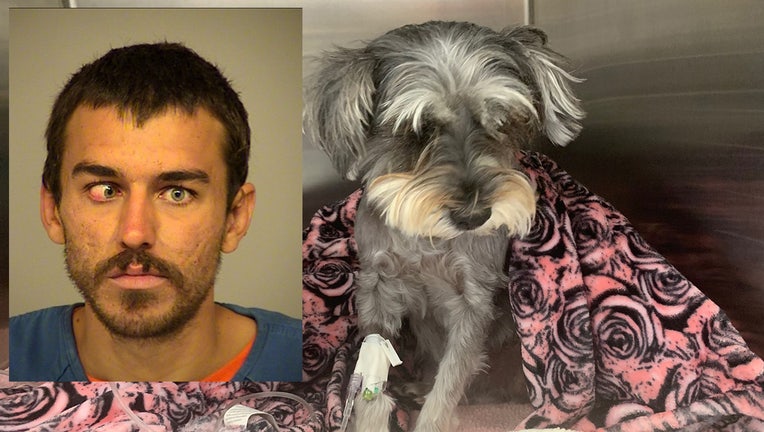 Port Hueneme police say Dylan McTaggert approached an unsuspecting victim and her dog, Sophie, from behind while walking along the beach in the 500 block of East Surfside Drive, and without provocation, kicked the dog approximately 15 feet into the air.

The dog's owner was not harmed but police say the dog went into shock and passed out. Nearby Port Hueneme lifeguards intervened and called police. Officers arrived and saw McTaggert throwing punches at one of the lifeguards, authorities said.

Police say McTaggert took off on foot when he saw officers approaching but was captured after a brief foot pursuit. He was booked and taken to Ventura County Jail for fighting in public, assault on a lifeguard, and felony animal cruelty. He is being held in custody in lieu of $25,000 bail.

Sophie the dog was kicked with so much force that she was diagnosed with a collapsed lung and displaced heart, police said. She is now resting at home and being cared for by her owner.

Anyone with information regarding this incident is asked to call the Port Hueneme Police Department at 805-986-6530.

Police say McTaggert is an Oxnard transient living along the homeless encampments on Ormond Beach and has been contacted several times by police for disturbing beachgoers on Hueneme Beach. Authorities say McTaggert is also on probation for assaulting officers and shoplifting.

In light of this and other incidents, The Port Hueneme Police Department says it's going to have an officer assigned to specifically patrol the beach area. Calls for service involving transients disturbing at the beach and citywide has doubled from the previous years, according to officials.