A man suspected of shooting three law enforcement officers in two days is dead after being shot in Highland.

SAN BERNARDINO COUNTY, Calif. - A man believed to be the suspect in Tuesday's ambush that injured a deputy is dead after a shooting broke out in Highland Wednesday.

According to the San Bernardino Police Department, officers are asking the public to avoid the area between Baseline Street and Victoria Avenue in Highland due to the shooting investigation.

As San Bernardino PD's SWAT officers tried to place the man – later identified as 34-year-old Erving Olikong – in custody, a shooting broke out, killing Olikong and injuring two officers at the scene.

A man involved in two separate shootings with law enforcement is dead after a shootout Wednesday.

Two police officers are recovering after a shootout in Highland.

Police believe Olikong was the suspect in Tuesday's shooting that left a San Bernardino County deputy – not to be confused with San Bernardino city police officer – injured.

Authorities described Olikong as a gang member with a lengthy history of violent crimes.

San Bernardino PD does not believe there are other suspects involved in Tuesday's shooting.

The county deputy hit in Tuesday's San Bernardino shooting is recovering at the hospital. San Bernardino County Sheriff Shannon Dicus says the deputy injured Tuesday is in good spirits and is expected to be out of the hospital in the coming days.

Authorities do not know how the deputy's cruiser from Tuesday's shooting caught fire the way it did. 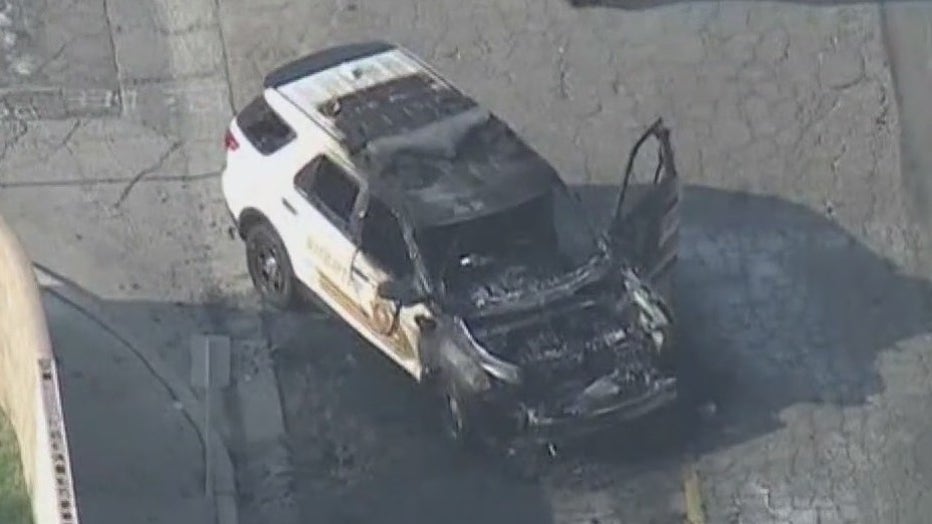