LOS ANGELES - A man accused of lighting fireworks close to a crowd during an illegal street takeover in Willowbrook was allegedly beaten by spectators.

The violent street takeover occurred at the intersection of East 135th Street and Avalon Boulevard in South LA’s Willowbrook neighborhood. Officials said it’s one of several intersections police responded to due to a series of illegal street takeovers Sunday night into early Monday morning.

The activity began around 10:30 p.m. at the intersection of South Denker and Manchester in Gramercy Park before a second street takeover was reported at Caldwell Street and South Central Avenue in Compton. The crowd at the second street takeover then moved to another takeover at S. Western Avenue and W. Century Boulevard, back in Gramercy Park, where the takeover was broken up by officers with the Los Angeles Police Department. 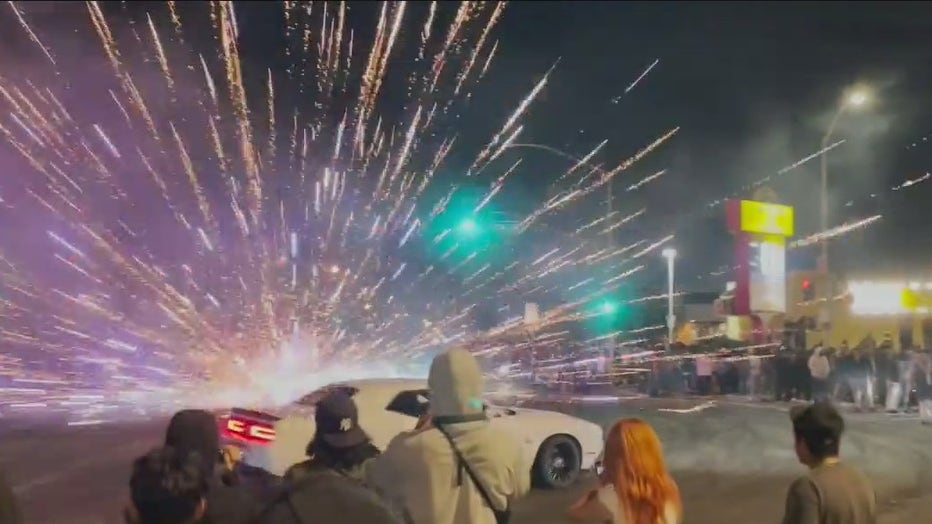 The last takeover of the night occurred in Willowbrook just after 12:30 p.m. Monday.

Video taken from the scene shows spectators flooded the intersection as drivers performed dangerous stunts, all while commercial-grade fireworks were lit in the middle of the street.

The video also shows a man being lifted out of the crowd. The man was reportedly beaten after he allegedly lit fireworks too close to the crowd, and he was taken away from the scene in a personal vehicle.

The LAPD and the Los Angeles County Sheriff’s Department responded to the series of street takeovers and both departments said no arrests were made and no one required hospitalization.