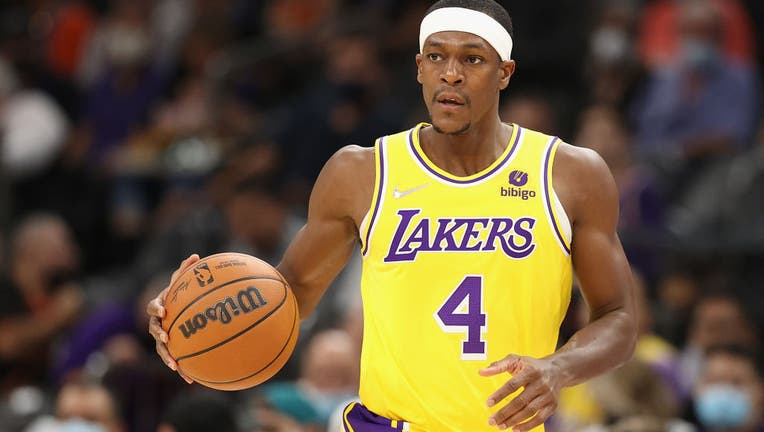 PHOENIX, ARIZONA - OCTOBER 06: Rajon Rondo #4 of the Los Angeles Lakers handles the ball during the NBA preseason game at Footprint Center on October 06, 2021 in Phoenix, Arizona. The Suns defeated the Lakers 117-105. (Photo by Christian Petersen/Get

LOS ANGELES - The Los Angeles Lakers are trading All-Star point guard Rajon Rondo to the Cleveland Cavaliers in a three-team deal that also sends Denzel Valentine to the New York Knicks, according to reports.

The trade news was first reported by Shams Charania with The Athletic Monday morning.

According to ESPN’s Adrian Wojnarowski, the deal with the Knicks will save the Lakers an estimated $4 million in salary and luxury tax.

After Cleveland lost Ricky Rubio for the season due to an ACL injury, the team is in dire need of a seasoned point guard.

Rondo has played for a handful of teams across the league, and notably won championships with the Boston Celtics in 2008 and the Lakers in 2020.

In November 2020, he signed a deal with Atlanta. Later in the 2020-21 season, he was traded to the LA Clippers in exchange for Lou Williams. In the 2021 offseason, he landed back on the Lakers.

As of Monday, the Lakers are currently ranked seventh in the Western Conference with a 19-19 record.