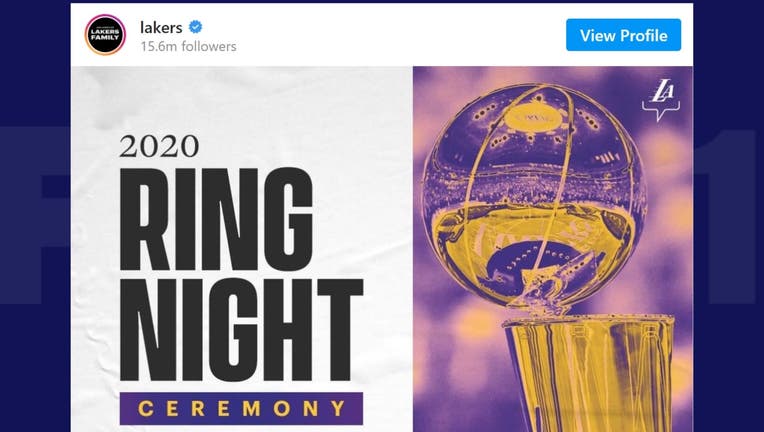 LOS ANGELES - Believe it or not, NBA season is just hours from tipping off once again and the Los Angeles Lakers will celebrate the team's 2020 championship run before facing their "hallway rivals," the Los Angeles Clippers Tuesday night.

The Lakers will hold a pregame ring ceremony at 6:30 p.m. PT to honor the franchise's 17th NBA Finals championship.

The game between both LA teams will tip-off at 7 p.m. PT at Staples Center. As the world continues to battle the pandemic, Tuesday's opener will not have fans watching the ring ceremony or the game in-person at Staples Center.

Lakers star LeBron James admitted on social media that not having fans at the area for Tuesday's festivities will be a bummer.

Both the Lakers and the Los Angeles Dodgers were unable to hold in-person parades after winning their respective league championships. The Dodgers livestreamed the team's celebration weeks after the team's title run and the Lakers will hold a virtual opening night party ahead of the ring ceremony and the season opener.

You can click here for more information on the Lakers' virtual opening night party.