LONG BEACH, Calif. - Two people are dead, another injured after being struck by a suspected DUI driver on Halloween night in Long Beach.

The accident happened just before 10 p.m. in the area of Country Club Drive and Los Cerritos Park Place.

According to the Long Beach Police Department the pedestrians hit were a family, with the son being only 3-years-old.

Once on the scene officers located a man, a woman and a boy lying on the ground and began administering life-saving measures. All three were taken to a local hospital where the father later died.

The Long Beach Police Department was then notified that the little boy in the crash died from his injuries on Saturday morning. The condition of the child's mother was not immediately known. 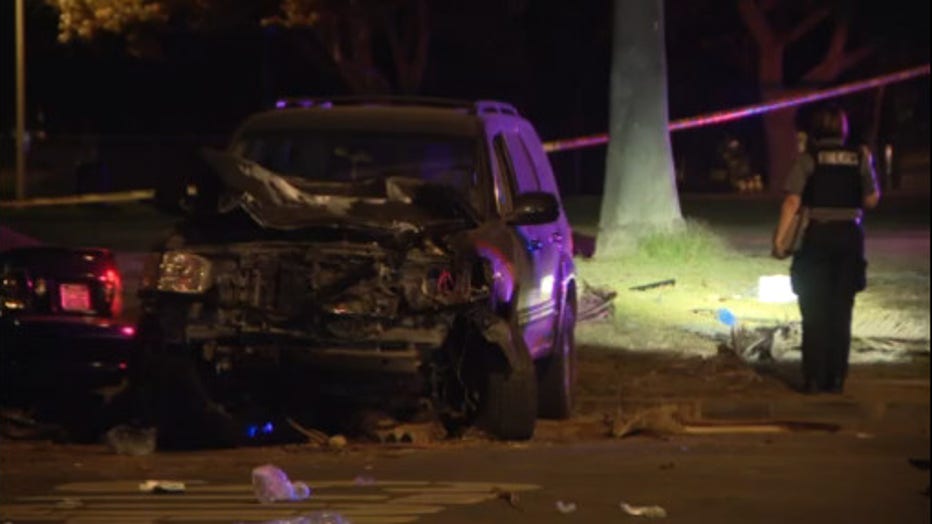 An investigation has revealed that the driver of a 2002 Toyota Sequoia was traveling southbound on Country Club Drive approaching Los Cerritos Park when he failed to make a turn. Police say he then drove up onto the sidewalk and struck the family who was walking on the sidewalk.

Carlo Navarro, 20, was detained at the scene and booked for driving under the influence and gross vehicular manslaughter. He is being held in the Long Beach City Jail on $100,000 bail.

The family has been identified by friends as Joseph, Raihan and baby Omar. A GoFundMe account has been set up.

Anyone with information on the crash is urged to contact Long Beach police at 562-570-7355. Anonymous tips can be submitted through “LA Crime Stoppers” by calling 1-800-222-TIPS (8477), downloading the “P3 Tips” or by visiting www.lacrimestoppers.org.