The community put together a surprise for some hero kids who helped save their friend.

EASTVALE, Calif. - Fourteen-year-old Jacob Kern is lucky to be alive. He might not be without his group of friends.

"I want to thank all of you guys. You gave us the best gift ever…and that’s our son," said Jacob’s mom, Jackie.

In late November, Jacob was hit by a car while riding his bike near his Eastvale home.

Jacob’s friends were nearby.

"We were crossing the street and I just remember hearing a loud bang and I turned around and I heard tires screeching," said friend Nicholas Reyna.

"We just saw our friend, trying to support him, help him out," said friend Logan Novak. "It was terrifying having to see him there."

Friend Noah Jones also couldn’t believe what he was seeing: "I kind of stopped thinking, I was so worried about him."

Their buddy Haiden Chase tried to care for Jacob.

"I was keeping my feet and hands under his head so it wouldn’t hit the ground and he was kind of seized up. He was shaking a bit. It was really scary," he said.

A good Samaritan saw what was happening and stopped to help.

"What I did was I parked my car sideways in front of him to block his body from being hit by traffic. I realized he had an injury so I supported his head and his neck until his mom got there," said Heather Christopher.

Heather had never met Jacob before but said she felt compelled to do something.

"That’s what good people do," she said.

Jacob’s parents are overwhelmed with gratitude.

"God put all the right people in place to protect him and we get to have more time with him because our life would change and we weren’t ready for that," said Jacob’s mom, Jackie.

"If it wasn’t for them, he probably would have been ran over by somebody on the street. Nobody was paying attention. The driver certainly wasn’t when he hit him," said Jacob’s father, Greg.

Jacob was rushed to the hospital. Doctors told Greg that Jacob had a brain bleed.

For several days, he couldn’t walk or talk.

Yet, Jacob’s friends kept calling to check up on their friend.

"They FaceTimed and I finally saw my son smile for the first time since the accident and they really helped him get through it," said Jackie.

Since Jacob’s bike was busted in the crash, Jacob’s friends pooled their money to buy him a new bike.

"We wanted to be good friends and get him the best-looking bike that we could find," said Haiden.

Jackie’s mom wanted to do something to pay them back.

Tami Horetski of the SoCal Honda Dealers showed up at Jacob’s home to surprise the boys.

"To thank you for your act of service, we are presenting you with brand new bikes and helmets," she said.

The boys were blown away.

"I’m so surprised. Oh my God! I see their ads all the time and to think something like this would happen to us…oh my God," said Noah.

Horetski then announced that Honda was renting out a local theater so the boys could see the latest "Spiderman" together. And, they delivered a mobility scooter for Jacob to get around easier.

"We really appreciate that. He gets really tired walking a short distance so that’s really awesome," said Jackie.

Jacob has a long way to go in his recovery, but he’s slowly learning to walk and talk again.

He hopes his story serves as an inspiration to others.

"Don’t let anyone tell you that you can’t do something," he said. "Believe in yourself and always follow your dream!" 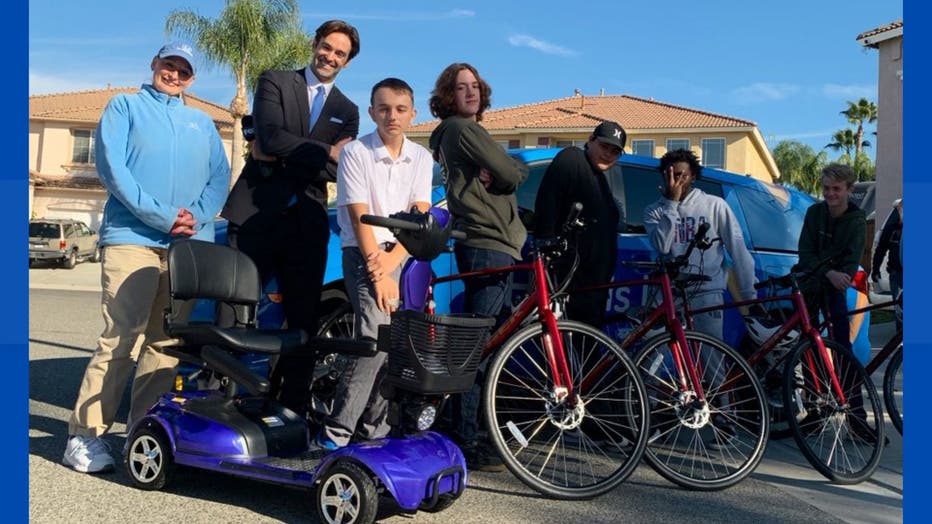