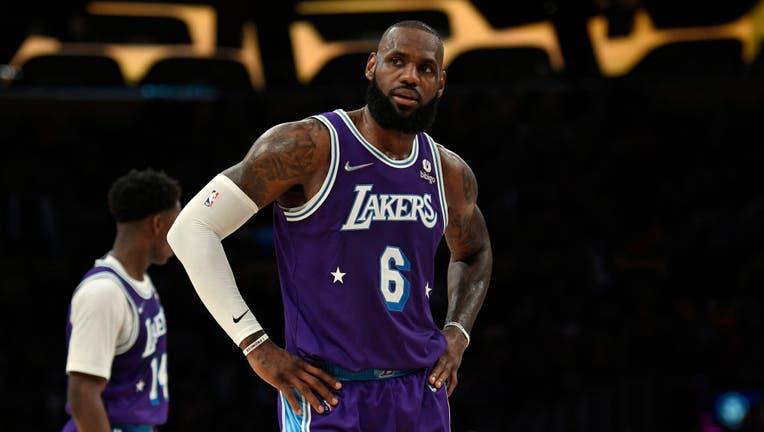 LOS ANGELES, CA - APRIL 01: LeBron James #6 of the Los Angeles Lakers reacts in the closing seconds of the game against the New Orleans Pelicans at Crypto.com Arena on April 1, 2022 in Los Angeles, Callifornia (Photo by Kevork Djansezian/Getty Images

LOS ANGELES - The Los Angeles Lakers announced Friday NBA superstar LeBron James will not play in the final two games of the season.

"LeBron James’ left ankle was recently reevaluated by Lakers medical staff, and it was determined that due to the ankle sprain James suffered in a game on March 27th, he will miss the remainder of the 2021-22 NBA season to allow for continued healing and an expected full recovery," the Lakers said in a statement on social media.

The franchise’s front office is expected to have a busy offseason after the Lakers failed to not only qualify for the playoffs, but the play-in tournament, despite having a "Big Three," composed of James, Anthony Davis, and Russell Westbrook.

The Lakers are wasting no time in rebuilding as Trevor Ariza, 36, was waived Thursday.

The Men in Purple and Gold have lost their last eight games, including Tuesday night’s loss against Phoenix which eliminated them from playoff contention.

After the disappointing season, ESPN’s Stephen A. Smith said "King James," should no longer be in the conversation as the G.O.A.T (greatest of all time), saying he felt James should have been more focused on leadership as opposed to a scoring title.