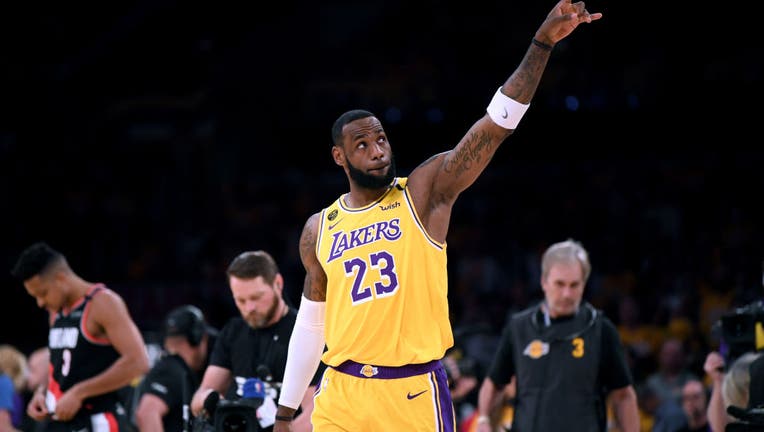 LeBron James #23 of the Los Angeles Lakers points at the two retired jerseys in the rafters to honor Kobe Bryant before the game against the Portland Trail Blazers at Staples Center on January 31, 2020 in Los Angeles, California. (Photo by Harry How/

James scored a game-high equaling 35 points in the Lakers' 113-112 loss to the Philadelphia 76ers Sunday night at Crypto.com Arena and became the second player in NBA history to reach 38,000 career points.

James surpassed the 38,000-point mark with five minutes, 43 seconds left in the first quarter when he made a 20-foot jump shot, increasing his game total to 12 and career total to 38,001.

James is seventh in the league in scoring, averaging 29.2 points per game. If he maintains his average and does not miss a game, he would set the record Feb. 9 in a game against the Milwaukee Bucks at Crypto.com Arena.

The Lakers (19-24) have lost three consecutive games following a season-high five-game winning streak. They are 13th in the 15-team Western Conference, 1 1/2 games behind the Utah Jazz in the race for the conference's final spot in the play-in tournament.

Monday's game will be the Lakers' first against Houston this season. The Rockets (10-33) have the NBA's worst record and have lost 10 consecutive games and 15 of their last 16, including a 121-100 loss to the Los Angeles Clippers Sunday at Crypto.com Arena where they were outscored 30-10 in the fourth quarter.

Embiid missed a 15-foot fadeaway shot on the ensuing possession, but Russell Westbrook's potential game-winning layup with 3.1 seconds to play was blocked by Niang and Embiid grabbed the rebound.

James made 15 of 23 shots, including one of five 3-point shots, and four of five free throws. He had 10 assists. The Lakers outscored the 76ers by 19 points in the 35:18 James was on the court, the game's best plus-minus figure.

Westbrook scored 20 points and had 14 rebounds and 11 assists, both team highs.