The number of marriage licenses in Las Vegas is higher now than in 2020 and in 2019, according to data from the county clerk's office.

LAS VEGAS - After a slow year in 2020 amid the onset of the COVID-19 pandemic, the Las Vegas wedding industry is booming again in 2021 — and even higher than pre-pandemic levels.

April, May, June and July of this year all had more marriages than the same months in 2019. Marriage licenses in July were up more than 14% compared with 2019.

April, specifically, was 2021’s busiest wedding month with nearly 8,000 marriage licenses issued, compared to just 401 in April of 2020, Clark County data shows. The month is usually a busy one for weddings but this year the unique date of 4/3/21 brought even more eager couples to the altar. Nearly 700 couples obtained licenses for that date, said Jeff Klein, a spokesman for the Clark County Marriage Bureau.

Clark County Clerk Lynn Goya said about 20% of the marriage licenses issued are to local residents, while the other 80% are to tourists. The county clerk’s office closed for six weeks last year at the onset of the pandemic.

"Before COVID-19 shut the international tourism down, of the 80% of tourists that come to Clark County to get married, about 20 to 25% were international. Last year, we only had 3% because obviously people aren’t traveling and they still aren't traveling internationally," Goya said. 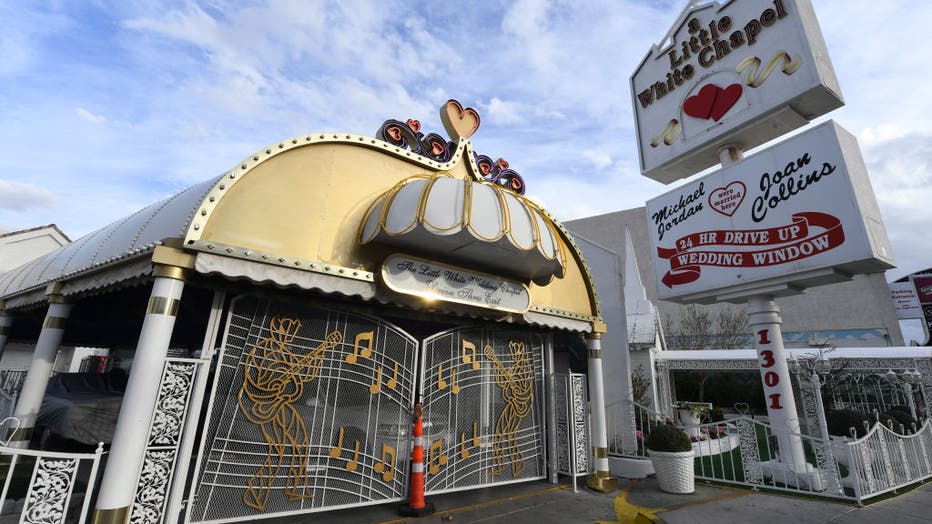 FILE - A file image dated March 22, 2020, shows the shuttered A Little White Chapel on Las Vegas Boulevard after businesses were closed as a result of the statewide shutdown to control the spread of COVID-19 in Las Vegas, Nevada. (Photo by Ethan Mill

At the beginning of the pandemic, Rod Musum, vice president and general manager of Graceland Wedding Chapel, said he had to cancel nearly 2,000 wedding ceremonies. Now, just like the experience of Kerestic at Chapel of the Flowers, business has been increasing again.

"It didn’t happen overnight, but as things started opening back up, we got a lot busier," Musum said. "There’s a lot of demand for ceremonies. Our daily bookings are starting to surpass what we were averaging pre-COVID."

Daniel Pinedo and Giselle Pompa tied the knot in early August at A Little White Chapel, a site that has hosted celebrity weddings such as Frank Sinatra, Michael Jordan and Britney Spears. The couple said their Vegas nuptials was an alternative due to the ongoing pandemic, and they had also considered a destination wedding in Mexico.

"The whole situation is just really unclear. Hopefully, in a year or two, it kind of settles and it goes back to normal and from there we kind of have more of a bigger wedding with all of the family and loved ones," Pinedo told FOX News.

As virus cases surge once again in the U.S., fueled by the highly contagious delta variant, the uncertainty for couples planning a future wedding is likely to continue — making a quick Vegas wedding more enticing for some.

"We’ve been the wedding capital of the world for, like, 50 or 70 years," Goya said. "I think it became so much a part of who we are that in some ways, we took it for granted. This last year and a half or so, Las Vegas emerged as a really safe, efficient, fun place to get married even during the pandemic. And I think that made people remember what made us the wedding capital of the world in the first place."