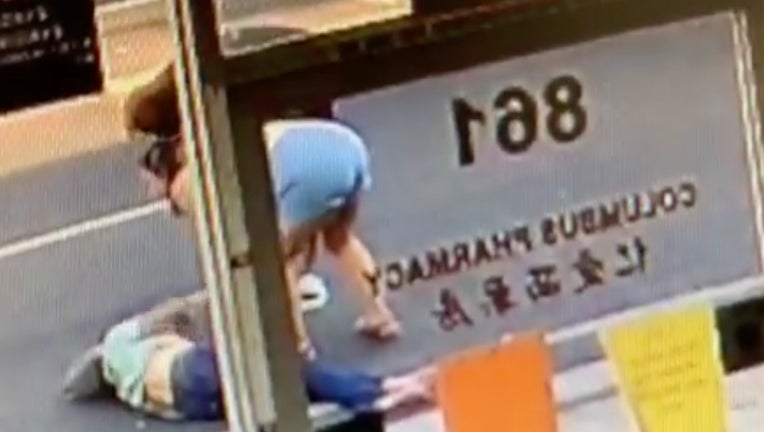 LOS ANGELES - The Los Angeles Police Department Tuesday released surveillance video from a hit-and-run that occurred on Sept. 4 in Chinatown that left a grandmother severely injured. The family of the victim and the LAPD hopes the driver will turn himself in or that someone will be able to identify him.

According to LAPD Commander Garold Woodward, the victim was crossing the street with the proper signal inside a crosswalk at the intersection of Broadway and College streets around 5 p.m.

As the victim was crossing the street, a driver took a left turn driving a Mercedes and slammed into her.

LAPD Detective Juan Campos said the victim did pull over for 44 seconds before deciding to leave the scene instead of calling for help.

Arriving Los Angeles City firefighters rushed the victim to a local hospital where she was placed in an intensive care unit.

Authorities said she suffered major injuries including multiple fractures and that she continues to fight for her life.

The suspect’s vehicle was described as a black Mercedes-Benz C230 between the years 2003-2006 with a temporary license plate, according to witnesses.

The driver was described by officials as a Black male, between the ages of 35-40, about 6 feet and 4 inches tall, weighing about 180 pounds, and with black hair styled in short locs and with bleached tips. He also has a face tattoo with the number 1 on the right side of his face and tattoos on both arms. He was last seen wearing a black tank top, with black shorts, and black and white shoes.

“Please do the right thing and turn yourself in,” the victim’s daughter said holding back tears.

Anyone with information is asked to contact the LAPD Central Traffic Division.