A suspect in a reportedly stolen vehicle crashed into a fruit stand in South LA on Tuesday afternoon.

LOS ANGELES - One person was taken to the hospital in serious condition Tuesday afternoon after a vehicle that was being pursued by Los Angeles Police Department officers crashed in South LA, authorities said.

The approximately 11-minute chase was triggered shortly before 1 p.m. by a LoJack "ping" at Vernon Avenue and Flower Street near the southbound 110 Freeway, the Los Angeles Police Department's Media Relations Division reported.

At least one person was injured Tuesday afternoon after an LAPD pursuit ended in a crash in South Los Angeles.

"Basically, there is a security measure on the vehicle, that when it is stolen, (the owner) can call LoJack and an LAPD airship or black-and-white (patrol vehicle) will receive a ping," according to a department spokeswoman.

The vehicle plowed through a gate, crashed into a fruit stand then hit a taco truck. No one at the fruit stand or taco truck were injured.

A person who led officers on a chase through parts of South LA crashed into a fruit stand and then hit a taco truck; luckily no one was injured. 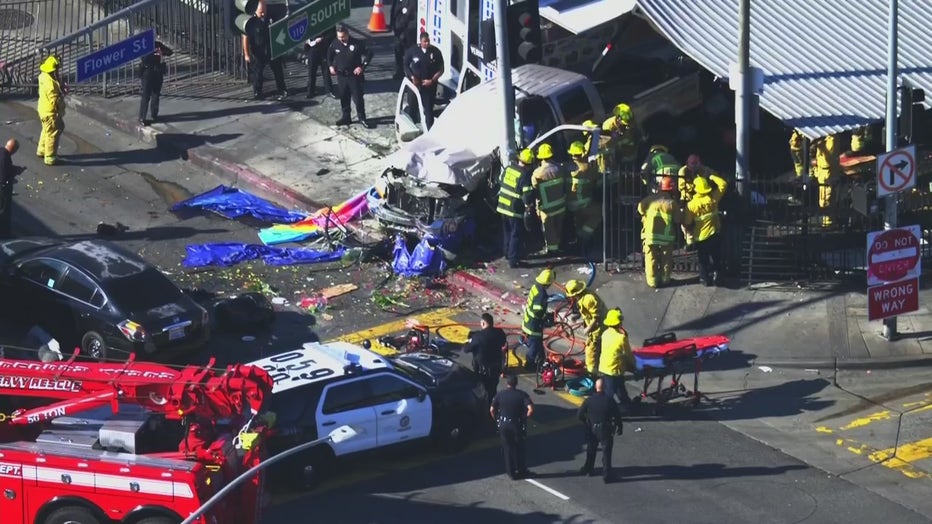 Authorities said a man estimated to be around 30-years-old became trapped inside the vehicle and firefighters worked to free the victim. He was then rushed to the hospital. He is expected to be charged.

The name of the suspect was not immediately available for release.