Officers with the Los Angeles Police Department fatally shot a suspect Monday morning, who they said broke into a West Los Angeles apartment and was holding an elderly woman at knifepoint.

LOS ANGELES - Officers with the Los Angeles Police Department fatally shot a suspect Monday morning, who they said broke into a West Los Angeles apartment and was holding an elderly woman at knifepoint.

The shooting was reported shortly before 6 a.m. in the 3700 block of Barry Ave in the Sawtelle area, authorities told FOX 11.

(Editor’s note: This story includes information related to domestic violence. If you or someone you know needs help, call the National Domestic Violence Hotline at 1-800-799-SAFE (7233).)

Police received a 911 call reporting that the female resident was screaming in distress.

The suspect reportedly broke into the apartment in the early morning hours and was forcing the female at knifepoint to take him to another location.

Responding officers shot the suspect, who was pronounced dead at the scene. The woman was not injured.

Police shot and killed a suspect Monday morning in the Sawtelle area and an investigation into the shooting was underway.

Investigators later determined that the suspect and female were related, but did not release any information about their relationship.

Video from Stu Mundel up in SkyFOX showed detectives inside a unit on the second floor of an apartment complex at the scene. 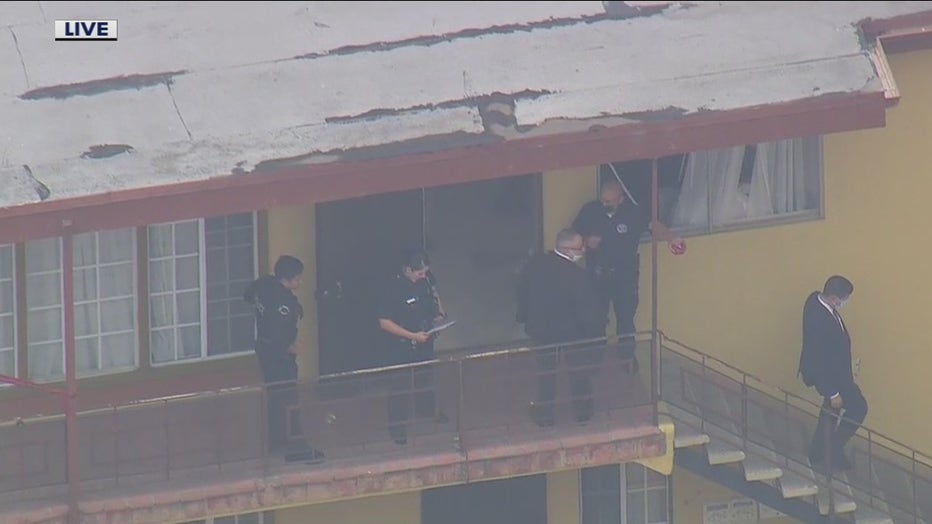 Information was not immediately available on the identity of the fatally wounded man.