The coroner has ruled the training death of LAPD Officer Houston Tipping an accident, but lawyers claim Tipping was retaliated against by an officer accused of sexual assault.

LOS ANGELES - The death of a Los Angeles Police Department officer during a training exercise was "a tragic accident" that occurred when he and another officer fell to the ground while grappling during a simulation, according to a report released Tuesday by the department's Office of Constitutional Policing and Policy.

The report countered claims made by an attorney for Officer Houston Tipping's mother, who filed a damages claim against the city alleging in part that the officer was beaten by multiple other officers in a scenario meant to "simulate a mob."

Lizabeth Rhodes, director of the Office of Constitutional Policing and Policy, told the city Police Commission on Tuesday that Tipping died during a one-on-one exercise in which he was playing the role of a suspect confronting a bicycle officer. She described a scenario in which Tipping, portraying the suspect, aggressively attacked the trainee officer, who at one point strikes Tipping in a leg with a foam baton. The strike caused no injury, but Tipping reacted "as he was supposed to in this scenario by going down on one knee to simulate a successful baton strike."

The attorneys of the family of late Los Angeles Police Department officer Houston Tipping revealed a new claim against the city of Los Angeles in connection with his accidental death during a training exercise in May. The attorney on Monday said Tipping died after being injured by a fellow officer who was under investigation for sexually assaulting a woman.

She said Tipping then re-engaged the other officer.

She said other officers in the training session immediately realized Tipping was injured and "appeared to be struggling to speak," leading to various first-aid efforts while paramedics were called.

"The coroner's office determined that this was an accident, as did the department," she said. "It was a tragic accident and again we express our condolences."

Asked about the allegation that Tipping had been attacked by a "mob" of officers, Rhodes said there was no evidence to support such a claim.

"I do realize that there are a number of allegations for which we have not seen any evidence out there," Rhodes told the commission. "... This was not a mob attack, as has been alleged, rather (a one-on-one scenario) which was Officer Tipping playing the role as a suspect in order to help officers learn how to deal with that one individual." 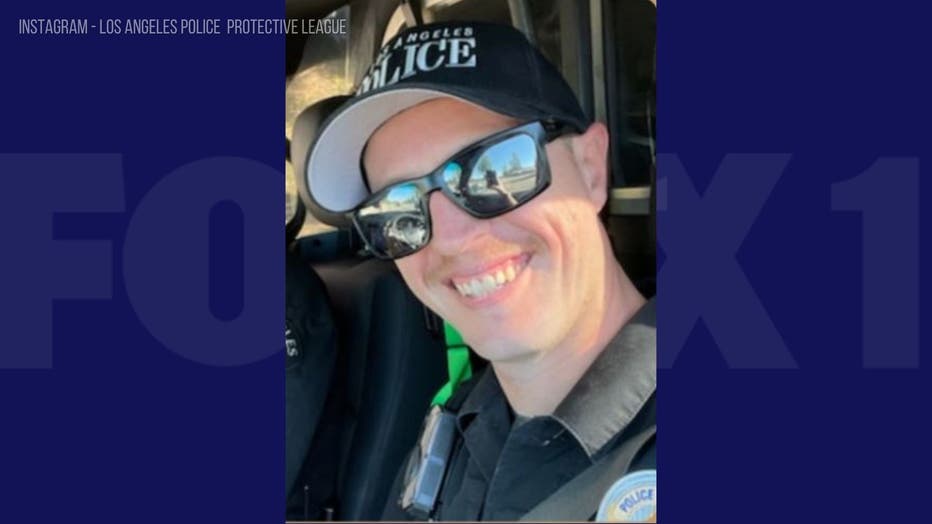 Tipping, 32, died May 29, three days after the training exercise at the LAPD's Elysian Park academy.

Although the department has repeatedly insisted Tipping's death was an accident, Tuesday's report provided the most detailed department description to date of the circumstances of the officer's death. Rhodes said that after Tipping was struck with the foam baton and went to a knee, he re- engaged the other officer by putting his head "into that officer's torso."

Attorney Bradley Gage, who represents Tipping's family, has disputed the LAPD's description of the encounter, suggesting in the family's damages claim that Tipping was severely beaten, requiring staples in his head due to lacerations suffered in the attack.

Rhodes noted in her report Tuesday that an autopsy listed a laceration on the side of Tipping's scalp, which was caused due to a clamp used during emergency surgery. She also said Tipping suffered rib injuries that were the result of CPR used in an attempt to revive him.

Rhodes' report, which was expected to be released publicly Tuesday afternoon, made a series of technical recommendations for improvements in future similar exercises. But she noted that even if the recommendations had already been in place, they likely would not have prevented Tipping's death.

Her report did not address an allegation made by Gage during a news conference Monday, claiming that Tipping was intentionally attacked during the exercise as an act of retaliation because he had filed a report about an alleged rape carried out by four other LAPD officers.

"I'm certainly alleging that at least one officer engaged in an abuse of force in order to try and scare or harm Officer Tipping in order to prevent him from investigating a claim of rape," Gage told reporters.

He suggested that one of the officers involved in that alleged rape was in the training class in which Tipping was fatally injured, and may have been the one who grappled with Tipping.

Moore noted that when Rhodes' report is released, it will not identify any of the other officers involved in the class, including the one with whom Tipping was grappling. He said that privacy was due to state law and the ongoing civil complaint.

Moore did not address Gage's latest allegation about the rape report during Tuesday's meeting.

Tipping was a five-year department veteran who worked out of the LAPD's Devonshire Division.

He is survived by his parents, Richard and Shirley; his stepfather Bob; his siblings Kat and Tyler; and his girlfriend, Brittany.