All southbound lanes of the 605 Freeway located north are the 60 Freeway were closed following a crash in Industry.

CITY OF INDUSTRY, Calif. - A crash involving a Honda Civic and a tanker truck carrying fuel Tuesday morning caused the semi to overturn on the southbound 605 Freeway in Industry, spilling fuel in lanes and prompting the closure of four freeway lanes.

The crash occurred near the 60 Freeway interchange around 1:40 a.m., according to the California Highway Patrol. 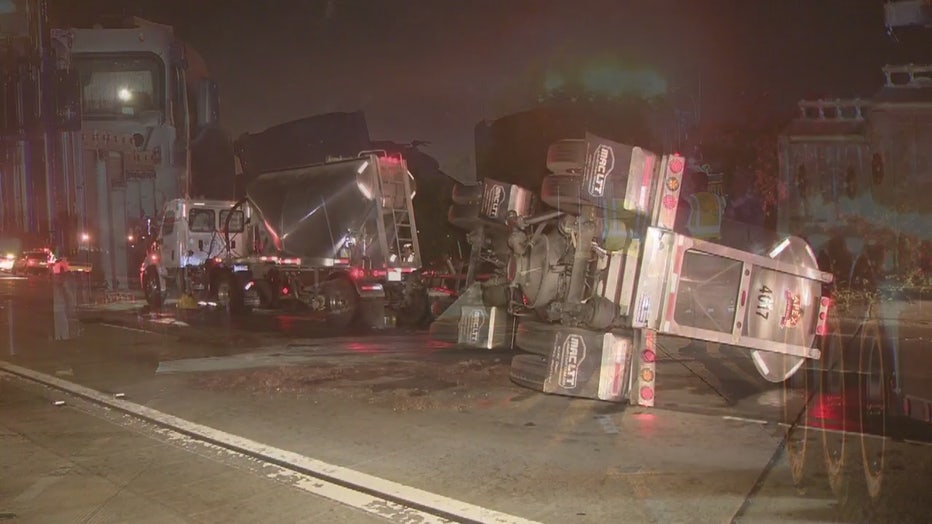 The fuel spill prompted the CHP to close the Nos. 1 through 4 lanes of the freeway until at least 7 a.m. Traffic was being diverted off the freeway at Valley Boulevard, the CHP said.

The truck was carrying approximately 8,200 gallons of fuel and at least 50 gallons "spilled onto (the) ground, but not into drains," Cal Trans tweeted at 4:35 a.m. "Tank will have to be emptied before (being raised)"

Los Angeles County fire paramedics were called to the scene, but it was unclear if anyone was injured, the CHP said.

The cause of the crash was under investigation.