A tornado destroyed the Lamar County couple's house and scattered their belongings throughout the neighborhood, including a recently purchased engagement ring.

PARIS, Texas - A Lamar County couple who lost just about everything they own because of a tornado was able to recover a very valuable item – one that means love and life to them.

Last week, Dakota Hudson and Lauren Patterson lost the new home they were building when an EF-4 tornado blew through Paris, which is about 100 miles northwest of Dallas.

During the storm, they sheltered nearby. They said they held on to each other and prayed in those frightening moments.

"It sounded like a freight train. It was the most God-awful noise you can ever imagine," Patterson recalled.

"We just held onto each other and we prayed, just dear Lord keep us safe, make this quick," Patterson said. "The house began to lift. You could hear the creaking of the house as it pulled up off the slab."

The tornado destroyed their house and scattered their belongings throughout the neighborhood.

Thankfully, everyone on their block survived the tornado.

"That’s when I realized I had just put that ring in the back house to hide it and I didn’t know how I was going to tell her, but I had to so I just came and told her and about lost it," he recalled.

An engagement ring, for a surprise proposal. It would take a needle in the haystack hunt to find it.

"I was at a complete loss whenever I found out the ring was gone. I never really thought I was going to see it again," Hudson said. "We started going through debris for hours. Her cousin found the top half of the ring box torn up. So we started looking in that area."

In their minds, they wrote it off.

Then, Tuesday, the Paris Junior College softball team was randomly paired with the family to help them salvage what they could.

When they learned what happened, they jumped into action to help with the search for the missing ring.

"I guess when you tell 20 girls that you’re looking for an engagement ring they’re going to make sure you’re engaged by the end of the day," Hudson said. "They did not let up. They all came out there and they were all work horses. The amount of work they were able to put in to help us out was phenomenal."

"He says if we find the ring he’s proposing on the spot. So, they did not let up," Patterson said.

The team managed to find the ring in the mud and rubble.

"One of the girls, Kate, she found it and she brought it over to me. I grabbed it, it was covered in mud," Hudson recalled. "The first thing I could see was a water bottle to rinse it off and I just walked over and asked her to marry me." 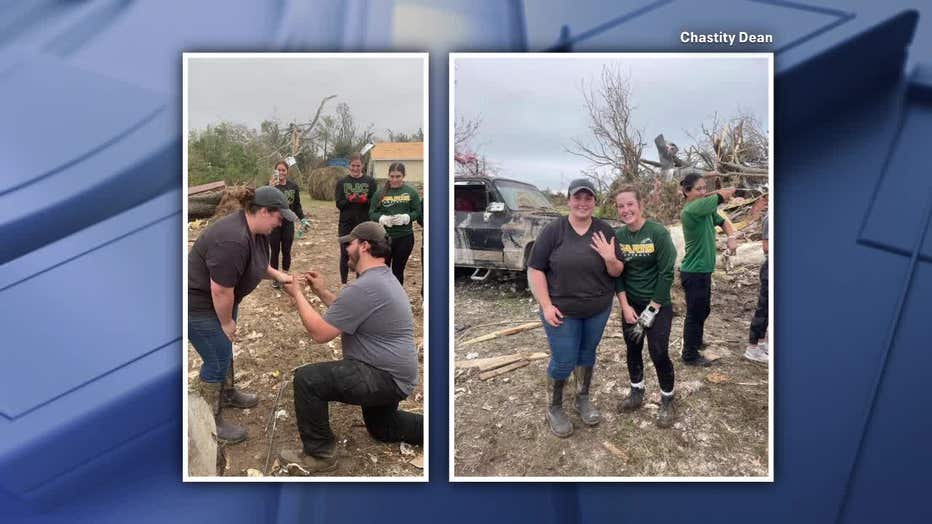 In that moment, he dropped to one knee.

"Making it through a tornado, what else am I going to wait for," he joked.

A joyous moment for them, and the now engaged couple hopes they can inspire others.

"This is a little light at the end of the tunnel for us. We still lost everything, just like everyone else did, but we’re so fortunate with how the community has banded together to try and help support everyone," Hudson said.