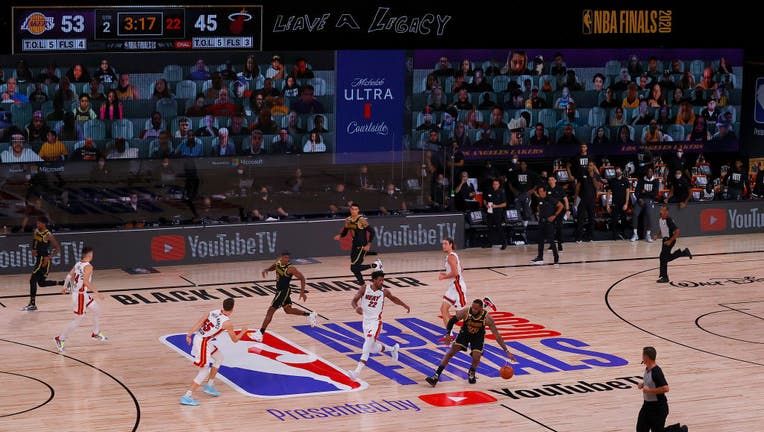 LAKE BUENA VISTA, FLORIDA - OCTOBER 02: A general view as LeBron James #23 of the Los Angeles Lakers dribbles during the first half against the Miami Heat in Game Two of the 2020 NBA Finals at AdventHealth Arena at ESPN Wide World Of Sports Complex o

Davis made 14 of his first 15 shots and 15 of 20 overall and pulled down a game-high 14 rebounds. James had nine assists and nine rebounds.

The Lakers are 20-1 when Davis and James combine for 60 points, tying
Kobe Bryant and Shaquille O'Neal in the 1999-2000 season for the best record in a season by teammates in NBA history, including playoffs, with a minimum of 15 games, according to the Elias Sports Bureau.

Game 3 of the best-of-seven series will be played Sunday. The entire NBA postseason is being played at the ESPN Wide World of Sports Complex in Lake
Buena Vista, Florida, due to the coronavirus pandemic.

The Lakers trailed twice, 5-4 and 8-6. They took the lead for good with eight minutes, eight seconds left in the first quarter.

The Heat played without two customary starters. Point guard Goran Dragic tore the plantar fascia ligament in his left foot in the second quarter of Wednesday's 116-98 loss in Game 1. An MRI revealed center Bam Adebayo has a neck strain on his left side, the Heat announced Thursday.

Dragic is Miami's second-leading scorer in the playoffs, averaging 19.9 points, while Adebayo is third, averaging 17.8, and leading rebounder, pulling down 10.9 points per game.

Meyers Leonard started at center in place of Adebayo. His only previous appearance of the 2020 playoffs was an eight-minute, 51-second stint in a 115-100 victory over the Milwaukee Bucks in Game 3 of the Eastern Conference semifinals Sept. 4. 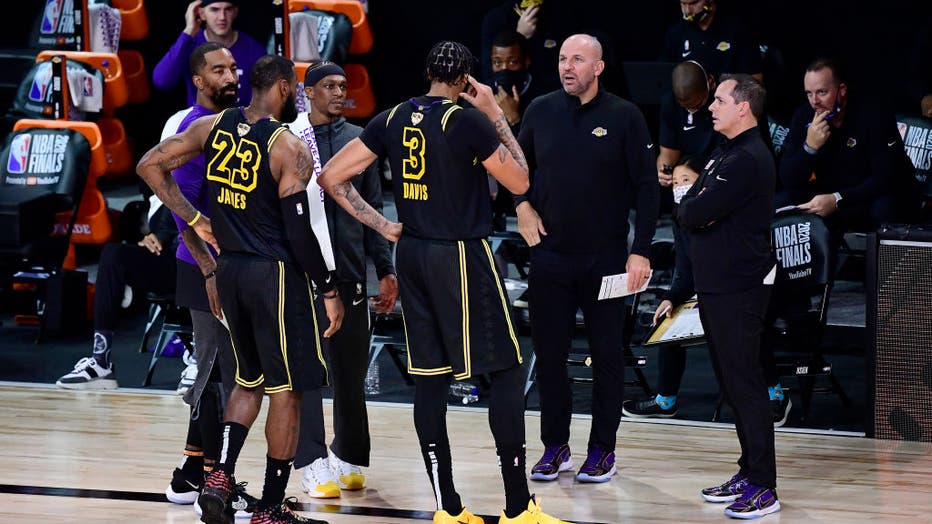 LAKE BUENA VISTA, FLORIDA - OCTOBER 02: LeBron James #23 of the Los Angeles Lakers talks with Anthony Davis #3, assistant coach Jason Kidd and head coach Frank Vogel during the second half against the Miami Heat in Game Two of the 2020 NBA Finals at

Leonard had seven points and no rebounds in 9:11. The Heat was outscored by eight when he was on the court.

Forward Jimmy Butler was the Heat's leading scorer with 25 points while forward Kelly Olynyk added 24 in 37:01 off the bench.

Three other Lakers finished in double figures -- Rajon Rondo had 16 in 26:01 off the bench while starting guard Kentavious Caldwell-Pope and reserve forward Kyle Kuzma each scored 11. Rondo had a team-high 10 assists.

Caldwell-Pope had the game's best plus-minus, with the Lakers outscoring Miami by 14 in his 31:51 on the court.

The Lakers wore their "Black Mamba'' jerseys Friday, improving to 4-0 in the 2020 playoffs wearing the uniforms designed in part by Bryant. They would also wear them if a seventh game is necessary.

The Lakers are seeking their 17th championship, which would tie the Boston Celtics for the all-time lead.