A captain with LAFD is under fire from his own department after comments on social media calling the city's vaccine mandate a "tyranny."

LOS ANGELES - A Los Angeles city fire captain is under investigation after a video posted on social media showed him calling the city's vaccine mandate a "tyranny."

"I am so hopping mad right now, you have no idea my head could pop," Los Angeles Fire Department captain Christian Granucci said in the video.

Granucci's comments on the social media app Telegram come days after Los Angeles City Council voted in favor of requiring COVID-19 vaccinations for all city employees, which includes LAFD staff, except for those who have medical or religious exemptions.

Prior to the passage of the ordinance, city employees were required to show proof of COVID-19 vaccination or a weekly negative test. Now, under the city council's approved order, non-exempt employees have until September 7 to get the first dose of the Moderna or Pfizer vaccine and the second dose must be taken no later than October 5. Those electing to take the Johnson & Johnson vaccine have until October 5 to be inoculated. 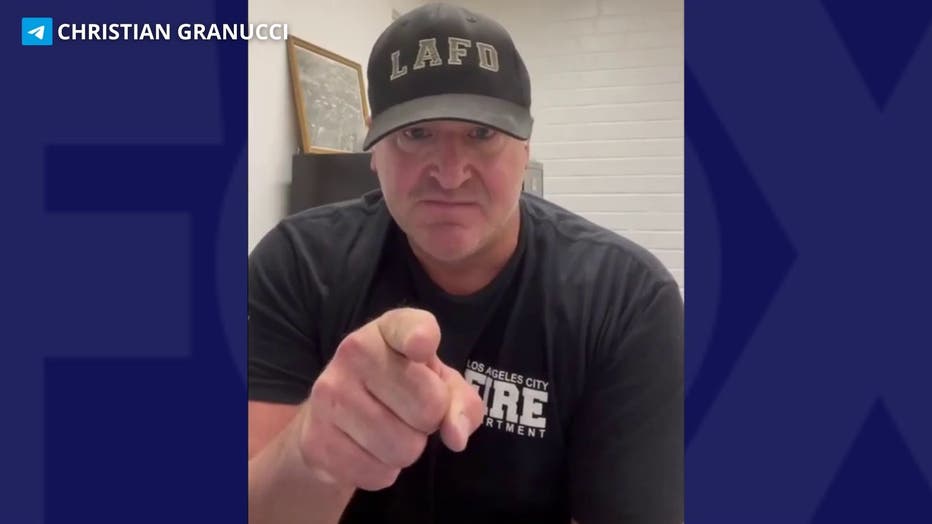 Granucci slammed the city council's push to vaccinate Los Angeles city workers in the video, accusing the order of violating the employees' freedom.

"This is tyranny," Granucci said. "This is about freedom of choice. The department has said we can seek medical exemption… that is a pie in the sky. We can even seek religious exemptions, but they know they have end-runs around those. The vaccinations will come. And then after that, it will be a booster, and another booster and another booster. When will this end? When will this tyranny stop."

Granucci vowed to put a stop to the "tyranny," blasting the department and the union representing the firefighters.

"You decided to play politics with us," Granucci said of the union.

Granucci also threatened legal action over the city's vaccine mandate, saying he and a group of unspecified firefighters have an attorney "on retainer."

"He is a shark," Granucci said of the unnamed attorney. "We will seek legal counsel and we will take fight to you, the City of Los Angeles."

"On August 18th, the Los Angeles City Council unanimously voted to require COVID vaccinations for city employees by early October. The legislation is awaiting the Mayor's signature approving the ordinance. The Department's Oath and Affirmation require all members to obey the Laws and Ordinances of the City of LA.

This morning, the LAFD was made aware of the video posted on social media. While we respect the individual's right to his opinion, he is not authorized to speak on behalf of the Department. The individual is in uniform and appears to be on duty, thereby giving the impression that he is speaking in an official capacity.

Therefore, the matter has been submitted to our Professional Standards Division for investigation, which may lead to disciplinary action."

"LAFD Firefighters and Paramedics have been at the forefront of the fight against coronavirus for almost 18 months providing vaccinations, testing, and emergency medical care for hundreds of thousands of Angelenos. When the City shut down, it was our first responders who continued to show up to care for our residents in the face of uncertainty.

Similar to the debate taking place throughout our country over vaccinations, there is passionate discussion regarding this issue in our fire stations. The majority of our firefighters have voluntarily been vaccinated and more are choosing to do so each week. We continue to encourage our members to get vaccinated, but we do not support any City policies that make it a condition of employment.

We are in discussions with the City because our highly skilled and experienced LAFD Firefighters and Paramedics cannot be easily replaced - especially in a department that is already understaffed. The unexpected departure of even a small percentage of our workforce would have a devastating impact on public safety in Los Angeles."