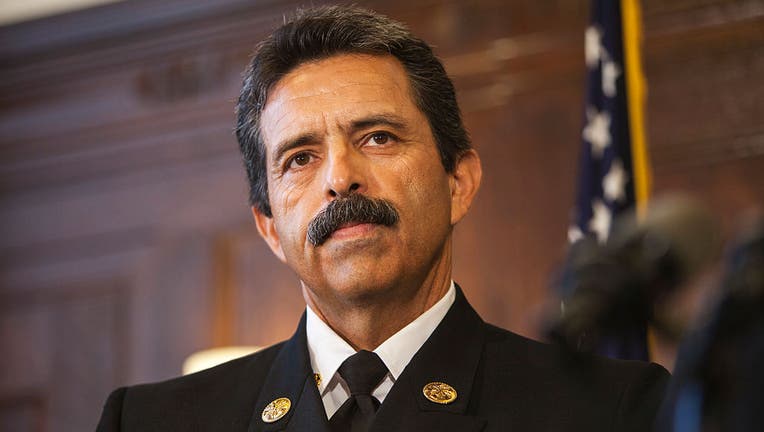 Commissioner Rebecca Ninburg said in the letter: "I have seen firsthand how Chief Terrazas has refused to take action against the ever-growing culture of racism, sexism, retaliation, and abuse in the Department. Urgency is required at this moment to create a safe environment for all LAFD firefighters -- without which this Department has been allowed to enable dangerous behavior time and again.

"Culture starts at the top and leaders set the tone. The Chief's apathy, indifference, and dismissal of claims of discrimination and abuse from the female and African American firefighters under his command have only emboldened the misogynists and racists who terrorize their fellow firefighters with impunity," Ninburg added.

The letter was sent on Oct. 19, a day after Los Angeles Women in the Fire Service President Kris Larson, who has served with the LAFD for 31 years, held a news conference to call for the chief's removal that included representatives from Equity on Fire, Women's March Action, California National Organization of Women and the Southern Christian Leadership Conference of Southern California.

Larson said Terrazas has brushed off the incidents of alleged abuse, harassment, sexism and racism as "one-offs or pockets."

Terrazas says he met with the group and is committed to working with them to improve the department.

Following Monday's news conference, Garcetti stood behind Terrazas in a statement to CNS, saying he has "full confidence" in the fire chief.

"Chief Terrazas has done an excellent job leading and rebuilding our fire department during some of our toughest days ever and I have full confidence in him. He and the entire LAFD leadership know that I have zero tolerance for sexism, racism, or harassment in our firehouses or any other workplace --- and I expect them to act with urgency when any allegations of abuse are brought to their attention," Garcetti said.

"The experiences that some firefighters have stepped forward to report are sickening and completely unacceptable, and I am working closely with the chief and others in this conversation to accelerate transformative, institutional reforms to bring about the fundamental change we all recognize needs to exist everywhere in this city and in this department," the mayor added.

In a statement to CNS on Monday, Terrazas said he met with the Los Angeles Women in the Fire Service last Thursday and "discussed collaborative initiatives to protect and enhance our work environments," including updating the department's Disciplinary Penalty Guidelines, having department-wide messaging occur more frequently and providing specific training to improve the workplace culture.

"I respect the LAWFS and all our other fire service organizations and will continue to have open communication and meetings to move forward together," Terrazas said.

The alleged abuses include:

-- feces spread around the women's restroom;

-- male firefighters exposing themselves and saying "this is what a fireman looks like";

-- racist objects inside the fire station;

-- racist and sexist comments and physical violence, according to a letter sent to Garcetti by the Los Angeles Women In The Fire Service.

During the news conference on Monday, an Orange County Fire Authority firefighter, speaking as a representative for Equity On Fire, said an LAFD firefighter said she was raped by another firefighter inside a fire station. She said the victim wished to remain anonymous.

Ninburg said in her letter to the mayor that she was "heartbroken" by the stories of abuse.

"I urge you not to let those stories fall on deaf ears again ... please do not continue to ignore the voices of the incredibly brave and accomplished women who have come forward."

Garcetti appointed Ninburg to the Fire Commission in 2015. She previously served as president and vice president of the Los Angeles Commission on the Status of Women.