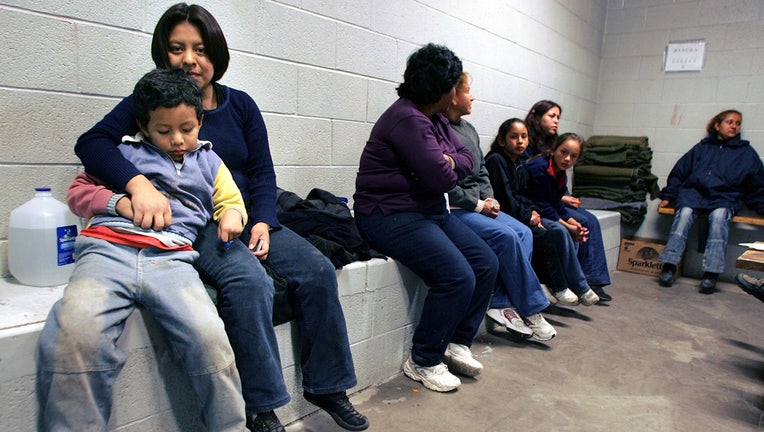 Margarita Ximil Lopez, 20, and her son Edel, 6, (L) inside an Immigration Detention Center in Nogales after they were detained by border patrol agents for trying to enter the U.S. illegally.

Supervisor Hilda Solis championed the plan to either file suit or a "friend of the court" brief in support of an existing lawsuit.

"The U.S. Customs and Border Protection's imprudent decision to deny migrant children the flu vaccine while they are detained at a border detention center is reprehensible and irresponsible," Solis said in a statement following the vote. "Flu outbreaks are common at CBP holding facilities. Unsanitary conditions, overcrowding and poor nutrition increase the risk for infectious diseases to spread quickly."

Last January, the U.S. Centers for Disease Control and Prevention recommended vaccinations for pregnant women and children at the earliest point of detention, but the CBP rejected the idea.

One child died a month before the recommendation was issued, and at least two children held at detention centers on the U.S.-Mexico border have died of flu since then.

The CBP has argued that it doesn't make sense to vaccinate children that they say are only in custody at the border for 72 hours, on average, before moving on to other long-term detention centers -- where they are typically vaccinated.

"To try and layer a comprehensive vaccinations system onto that would be logistically very challenging for a number of reasons," the agency said in a statement reported by the New York Times in December. "The system and process for implementing vaccines -- including vaccine supply chains, quality control, documentation, informed consent -- are already in place at other steps in the immigration process as appropriate."

Los Angeles County receives the second highest number of unaccompanied minors released from CBP custody, according to Solis, who warned that the federal policy could hurt Los Angeles residents.

The county board directed its lawyers to analyze the best way to mount a legal challenge.