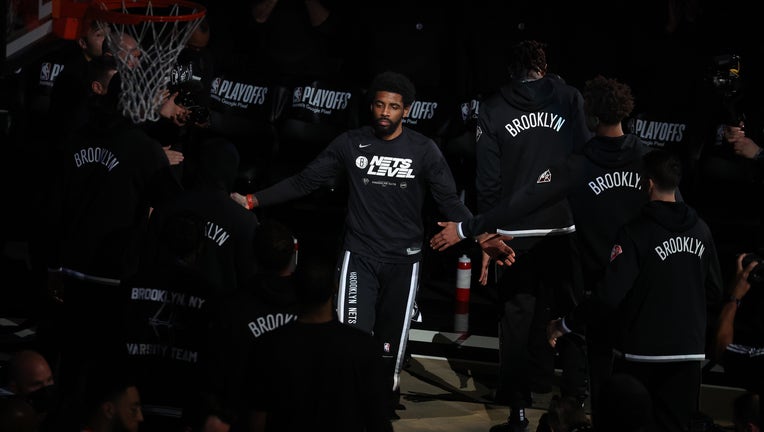 NEW YORK, NEW YORK - APRIL 23: Kyrie Irving #11 of the Brooklyn Nets is introduced against the Boston Celtics during Game Three of the Eastern Conference First Round NBA Playoffs at Barclays Center on April 23, 2022 in New York City. NOTE TO USER: Us (Getty Images)

Irving hasn’t held back about how he feels about the mandates having missed about two-thirds of the season due to New York City’s rules. Adams ended the private employer vaccine mandate on Tuesday, but city workers are still required to be vaccinated to work.

Irving took to Twitter to voice his frustrations on the matter.

"If I can work and be unvaccinated, then all of my brothers and sisters who are also unvaccinated should be able to do the same, without being discriminated against, vilified, or fired," he said.

‘This enforced Vaccine/Pandemic is one the biggest violations of HUMAN RIGHTS in history."

It’s not a stretch to say that Irving had the toughest time in the NBA as an unvaccinated player having played in New York City, where the restrictions on those without the vaccine were vast. Irving could only play in 29 games last season with Brooklyn, six of which came at Barclays Center.

Meanwhile, other players who were unvaccinated in the league were allowed to play in their home stadiums if it was allowed by their city mandates.

Irving began the season out of the Nets’ facility as owner Joe Tsai and GM Sean Marks agreed that he shouldn’t be a part-time player. That all changed when the Nets were getting injured and testing positive for COVID-19 at a high rate and positions needed to be filled. Irving, then, only played with the Nets when they went on the road.

It wasn’t until March of this year that New York City loosened restrictions, saying unvaccinated athletes and entertainers were allowed to perform at Madison Square Garden, Barclays Center and elsewhere.

"I played 29 games, I barely played home games. It wasn’t a typical season I would have wanted. But things happen. I had to stand on a whole bunch of bigger stuff than just that," he said via the New York Post.

Mayor Adams got a booster shot while stating the mandate change, saying, "Our vaccinated workforce kept the city open and operating, with over 300,000 employees it was crucial to put it in place, and we’re keeping it in place."

No end date to the mandate has been brought up by Adams.