We look back on a rare moment where Kobe Bryant spoke with a USC business class.

LOS ANGELES - One day in 2018, a friend asked David Belasco, an entrepreneurship professor at the University of Southern California's Marshall School of Business if he could book any speaker— who would he most want to speak to students at his course on High-Performance Mindset? Without hesitation, he answered "Kobe Bryant." Within minutes, the well-connected friend texted Bryant and confirmed to Professor Belasco that Bryant would indeed address his class.

Professor Belasco was thrilled at the opportunity.

First, he had to work through the logistics. Kobe could only speak to the class at noon, so Belasco adjusted his usual class time from night to day to accommodate the NBA legend's schedule. It was a noon lecture, with a hard out; Kobe needed to get back to Orange County to pick up his daughters from school.

On April 12, 2018, the Laker Legend walked into USC’s Bovard Auditorium to thunderous applause and a standing ovation.

"It was electrifying to have Kobe come there," Professor Belasco recalled. 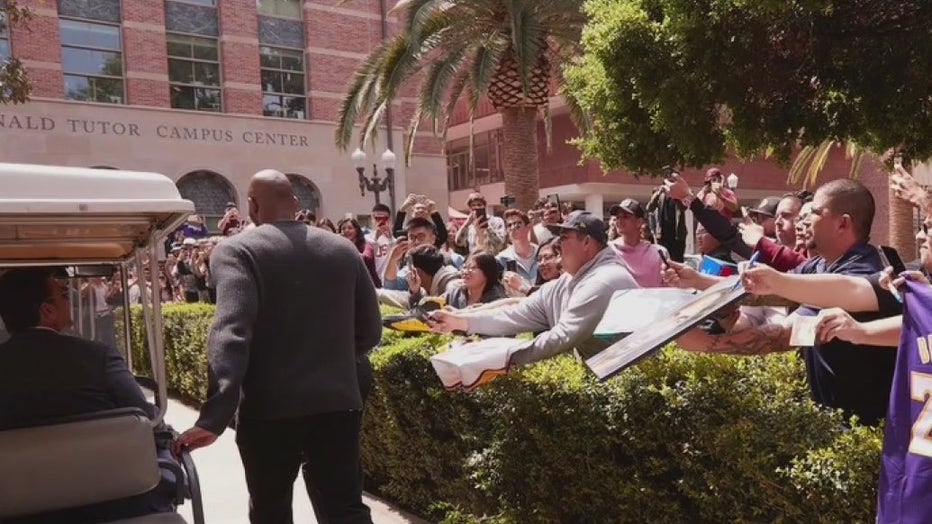 Kobe Bryant graduated from high school and went straight to the NBA when he was 17. He never attended college, yet he was brilliant and could speak English, Italian, and Spanish fluently. That afternoon, a capacity crowd of about 1,200 college students was hanging on Bryant’s every word. At the time of Kobe’s USC visit, he was two years into retirement from the LA Lakers. His legacy was cemented. In addition to his five championship rings and All-Star MVP status, Bryant had just been awarded an Oscar for Best Animated Short Film for his farewell love letter to basketball, called "Dear Basketball." It seemed Kobe’s second act as a storyteller was off to a spectacular start.

Over the course of his career, Bryant made no apologies for his unrelenting drive to achieve and to win at all costs. When former USC head football coach Pete Carroll asked Bryant a question via videotape about what it was like "working harder than everyone else— to play with people not as gritty as you are?" Bryant minced no words. "It may sound tough… I buried them. My tolerance for that is not to be tolerated."

And yet there were glimpses of introspection. In an answer to a question posed by Professor Belasco on how to keep continually stretching, Kobe spoke poignantly. "Make sure your dreams stay pure. It’s a matter of protecting your dreams and imagination," he said.

If ever there was a man who knew the power of dreaming and achieving it was Kobe Bean Bryant. When speaking of his historic 81 point game, he said he was actually in a lot of pain that night, and played through the pain. He shared a story from his childhood.  "I always dreamed as a kid, it was possible to score 80,90, 100. I always had a dream. I would lay in bed and visualize, I would imagine playing for the Lakers and what the uniform looked like and how it smelled. And I would see myself getting hot."

Bryant then took questions from students. When asked what he knew now that he didn’t know at the beginning, he replied " Understanding empathy and compassion."

When it was over, he shook a few hands at the door and then a mad dash to get into a golf cart. Pictures taken that day show USC students with outstretched hands trying to touch the NBA star-turned-entrepreneur-turned Hollywood storyteller. They wanted their time with Kobe Bryant to last longer, an emotion felt by fans across the globe.