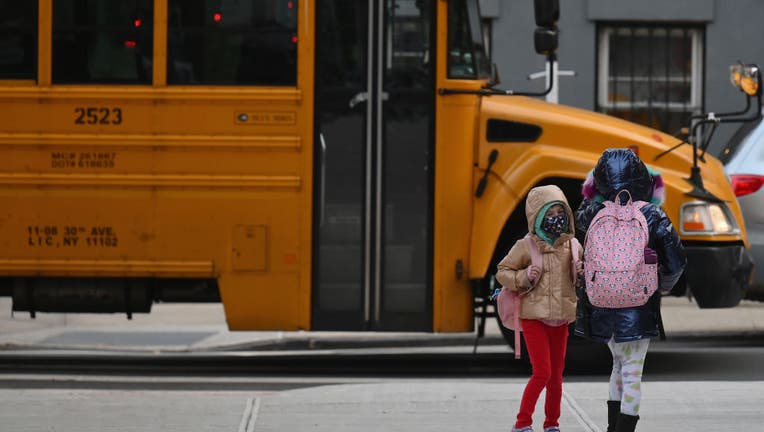 Children arrive for class on the first day of school reopening on Dec. 7, 2020 in the Brooklyn borough of New York City. (Photo by ANGELA WEISS/AFP via Getty Images)

JACKSON, Miss. - Children are more at risk of contracting the coronavirus at a social gathering than in a classroom or childcare setting, according to a study released by the University of Mississippi Medical Center.

Researchers surveyed patients younger than 18 who had tested positive for the virus in emergency departments and outpatient health facilities during September, October and November.

The study found that compared with children who tested negative, those who tested positive were more likely to have attended gatherings and have had visitors at home. Additionally, parents or guardians of children who were infected were less likely to report wearing masks at those gatherings.

"Household contacts versus a contact at school appeared to be more important in a child’s risk for being infected," said Dr. Charlotte Hobbs, professor of pediatric infectious diseases at UMMC and lead author on the study’s findings. Co-authors include experts from the University of Mississippi School of Nursing and the Mississippi State Department of Health.

In areas with minimal or moderate spread, the CDC recommends social distancing, masks and increased sanitation.

State Epidemiologist Dr. Paul Byers, who contributed to the research study, said the report highlights what health professionals have seen "played out time and time again" during the pandemic.

"It is imperative that we arm parents and families with the information needed to prevent infection in themselves and their children," Byers said.

The study also said that the "lack of consistent mask use" in schools led to some spread of the virus.

Hobbs said protecting children from becoming infected with coronavirus is essential to keeping the state’s schools and daycares open.

"We all know the vital nature of school for our children developmentally, academically and socially," she said.

The state Health Department reported Monday that Mississippi had 1,701 new confirmed cases of the highly contagious virus as of Sunday evening. The department also reported 28 new deaths, saying that 25 of them occurred between Nov. 12 and Dec. 20 and information was obtained later from death certificates. The state has reported 208,089 cases of the virus and 4,634 deaths from it since the start of the pandemic.