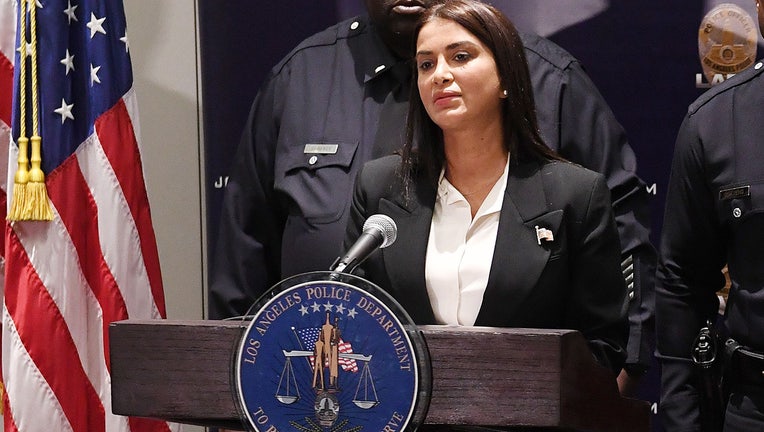 LAPD Captain Lillian Carranza holds a press conference to announce the arrest of four suspects in connection to a spate of high profile burglaries at the homes of singers, sportsmen and other celebrities in Los Angeles. ( MARK RALSTON/AFP via Getty Images )

LOS ANGELES - A judge has dismissed a lawsuit filed by a veteran Los Angeles police captain who claimed she suffered a backlash for alleging that the department doctored violent crime statistics.

On Monday, Los Angeles Superior Court Judge Elizabeth Allen White granted a motion by the city to dismiss the whistleblower lawsuit that Capt. Lillian Carranza brought in January 2018. The judge found the captain did not engage in protected activity.

In their court papers, papers, lawyers for the city said Carranza was not a whistleblower and that she was denied a promotion to commander for legitimate reasons.

"Plaintiff did not engage in a protected activity, and as such, did not blow any whistle," the defense attorneys stated in their court papers.

In her suit, Carranza maintained that after reporting the allegedly false crime data, "it was made clear to plaintiff that she will never advance or promote in the Los Angeles Police Department."

Carranza's suit further stated that she alerted her superiors about discrepancies in violent crime rates for four years, and was passed over for a promotion because of it. Carranza says she first told superiors about alleged underreporting of violent crime in the LAPD's Foothill area, but after no action was taken, she also reviewed reports and found similar issues in the Pacific, Central, Hollenbeck and Mission divisions.

Shortly after Carranza held a November 2017 news conference regarding her crime statistics allegations, then-Chief Charlie Beck called her allegations "not only lies, they're damn lies." Both the department and the inspector general looked into similar claims and found no wrongdoing, the chief said then.

Carranza was sent to the command post for the Creek fire near Sylmar in December 2017 in retaliation for her revelations, according to her lawsuit, which alleged the assignment was more suited for a sergeant or a police officer.

"While plaintiff was at the fire, she was exposed to smoke and other carcinogens for 10 to 14 hours a day for three days," the suit stated.

A day after Carranza left the fire zone, she was put on a regimen of steroids, antibiotics, pain medication and breathing treatments, according to her lawsuit.

Carranza alleged she has been denied training and ignored or ostracized during general staff meetings.

Carranza previously sued the city in October 2014, alleging she was being denied promotions in retaliation for her decisions while sitting on two Board of Rights hearings involving allegations of officer misconduct. After one of those hearings, Carranza said she recommended that the officer be suspended rather than fired, and in the second, she issued a not-guilty verdict.

Her decisions were not well received by LAPD management, some of whose members believed all officers sent to Board of Rights hearing should be fired, according to the suit, which Carranza dropped in January 2015. Court records were unclear on whether she reached a settlement or decided against pursuing the case for other reasons.