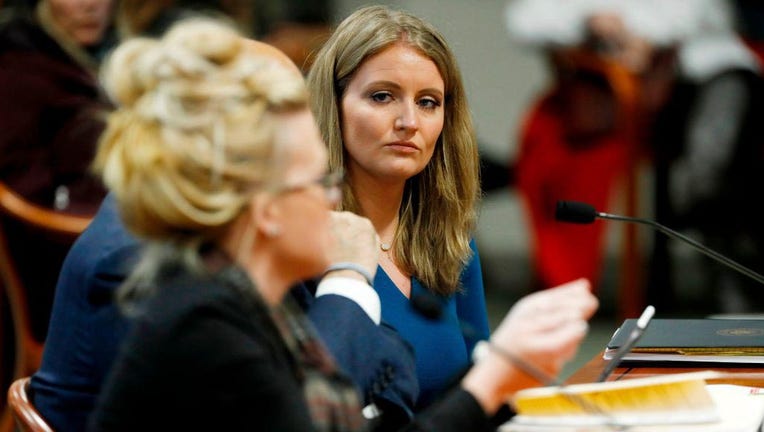 Lawyer Jenna Ellis (R) listens to Melissa Carone, who was working for Dominion Voting Services, as she speaks in front of the Michigan House Oversight Committee in Lansing, Michigan on Dec. 2, 2020. (Photo by JEFF KOWALSKY/AFP via Getty Images)

Her diagnosis came days after she attended a White House holiday party without a mask, according to two administration officials, who spoke on condition of anonymity because they weren’t authorized to speak about her condition publicly.

Giuliani and Ellis have traveled across the country in recent weeks as part of Trump’s futile effort to subvert the Nov. 3 election, which he lost to President-elect Joe Biden.

RELATED: COVID-19 exposure at Giuliani testimony in Lansing results in mandatory quarantine for many attendees

Ellis attended the White House holiday party on Friday night. Trump has continued to host large gatherings with hundreds of largely maskless guests despite the pandemic and his own administration’s warnings against them.

Giuliani defended Ellis when he called into his radio show Tuesday from a Washington hospital. “All you can go by is the test you take,” Giuliani said. “If you are invited to a place and they test you and test you as negative, you go in. You don’t know you have it.”