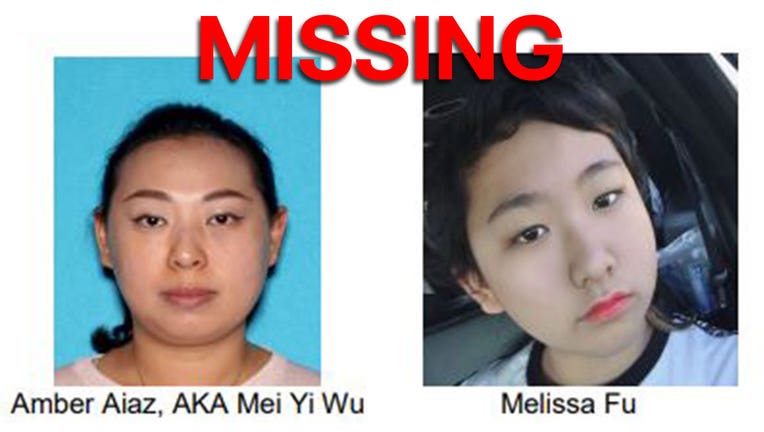 IRVINE, Calif. - The Federal Bureau of Investigation is offering a $10,000 reward for information leading to the whereabouts of a mother and daughter who were reported missing in 2019 in Irvine. Authorities now believe the pair may have been kidnapped.

Amber Aiaz, who is also known as Mei Yi Wu and her daughter, Melissa Fu, were reported missing on Dec. 4, 2019, by the Irvine Police Department. Since then, detectives have developed reason to believe the two were possibly kidnapped.

"According to Amber’s husband, two subjects knocked on the door to their apartment. When he opened the door, he saw a male and female of Chinese descent standing at the door and he was immediately rendered unconscious by an unknown substance. When he awoke, Amber and Melissa were missing," Irvine Police wrote in a press release Thursday.

Her husband told police that he did not know the man or woman and said it was possible they were seen by other potential witnesses in the apartment complex.

Police said they may have been associated with a black Cadillac, unknown model.

Fu was described by police as 5-feet-11-inches tall, 200 pounds, with medium length dark brown hair and brown eyes. She was last seen wearing a black tracksuit.

Anyone with information on their whereabouts was asked to contact the Los Angeles FBI Field Office at 310-477-6565.