Soccer fans at the Khalifa International Stadium in Doha, Qatar, could be heard whistling during the Iranian national anthem while Iranian players stood silent. Credit: Vinicius Guedes via Storyful

DOHA, Qatar (AP) - Iran was reeling Tuesday from the humiliation of starting the World Cup with a lopsided 6-2 loss against England in a match overshadowed by protests on and off the field.

Hard-line Iranian media sought to blame the defeat on the unrest that has gripped the Islamic Republic since the Sept. 16 death of 22-year-old Mahsa Amini in the custody of the country's morality police. Iranian newspapers turned to the familiar tactic of accusing foreign enemies, including the United States, Britain and Israel, of stirring up protests to throw the national team off its game.

"Iran - 2; England, Israel, Saudi and traitors - 6," read the headline in hard-line daily Kayhan. The newspaper, whose editor-in-chief is appointed by Iran’s Supreme Leader Ayatollah Ali Khamenei, said Iran’s rout came after "weeks of unfair and unprecedented psychological warfare against the team ... from domestic and foreign-based traitors." It added that a "political media current" has sought to "damage the spirit of Iran’s team by attacking them."

Iran fans in the stands on Monday chanted Amini’s name, held signs and wore T-shirts with protest slogans and booed during the national anthem. Many fans appeared conflicted over whether to even support their national team against the backdrop of security forces’ violent crackdown on demonstrations. At least 419 people have been killed since the protests erupted, according to the watchdog Human Rights Activists in Iran. As the game unfolded on Monday, Iranian security forces unleashed heavy gunfire against protesters in a Kurdish town in the country’s west. 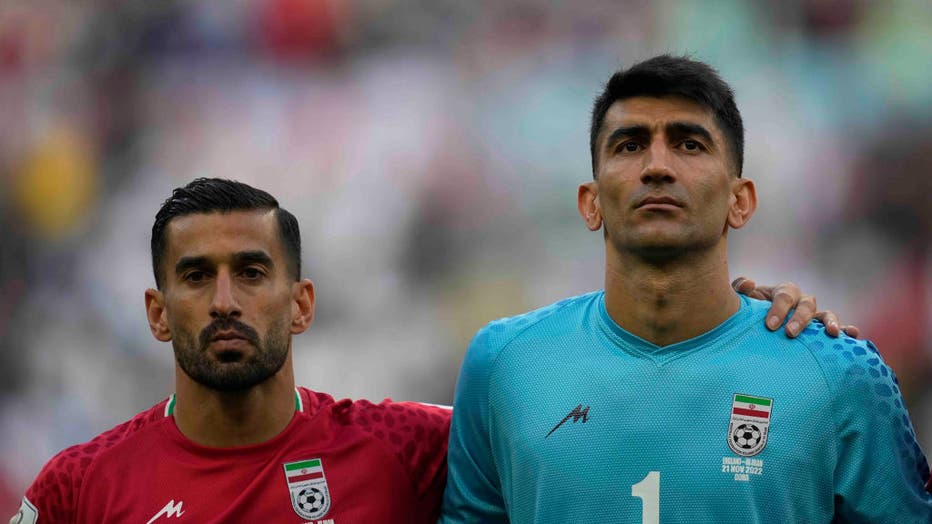 Another hard-line daily, Vatanemrooz, reported that protesters in Iran celebrated their country’s humiliating defeat in the streets, bursting into cheers in coffee shops when England scored goals and honking car horns with joy after the game. Footage from central Tehran spread online showing motorbike drivers honking and chanting "Six!" in reference England’s six goals against Iran. Authorities shut down a coffee shop in the northeastern city of Mashhad for announcing it was rooting for England.

"None of the players were ready in spirit," wrote Iran’s pro-reform Shargh daily.

The nationwide protest movement first focused on Iran's state-mandated hijab, or headscarf, for women, but soon morphed into calls for the downfall of Iran's ruling Shiite clerics. Over the course of the demonstrations, filmmakers, actors, sports stars and other celebrities have been speaking out publicly against the government.

Iran's national team has come under enormous pressure from protesters to show support in the run-up to soccer's global championship. The players faced a barrage of public criticism last week after meeting with President Ebrahim Raisi at a send-off ceremony, where they were silent on the issue of protests. A few players were photographed bowing in respect to Raisi.

"So you went to the president, that was the best opportunity to ask him not to kill kids and teenagers, at the very least!" prominent Iranian actor Parviz Parastouei wrote on Instagram.

Before the kick-off against England, Iranian players did not sing their anthem, standing silently in an apparent act of solidarity. During the match they didn't celebrate the team's two goals.

The players risk heavy backlash for making even the smallest gestures of protest. State-run IRNA news agency has sought to promote the team as a patriotic symbol and national unifier amid the turmoil, describing the players as "soldiers fighting to uplift their country."

Protests sparked by the death of 22-year-old Mahsa Amini, in police custody, rocked Iran for fifth straight day. Amini died last Friday while in police custody. She was detained by the country’s morality police for allegedly wearing the mandatory Islamic headscarf too loosely.

Some former soccer stars who have championed the protest movement have been arrested or charged in absentia. Moslem Moein, the head of the paramilitary Revolutionary Guard's Cyberspace Organization, called out four of the most vocal retired players, who reportedly refused invitations to attend the World Cup as guests of the government.

"England’s forwards did not score the goals," he wrote, adding that Iran's defeat was the work of the outspoken former players, who protested off the pitch.