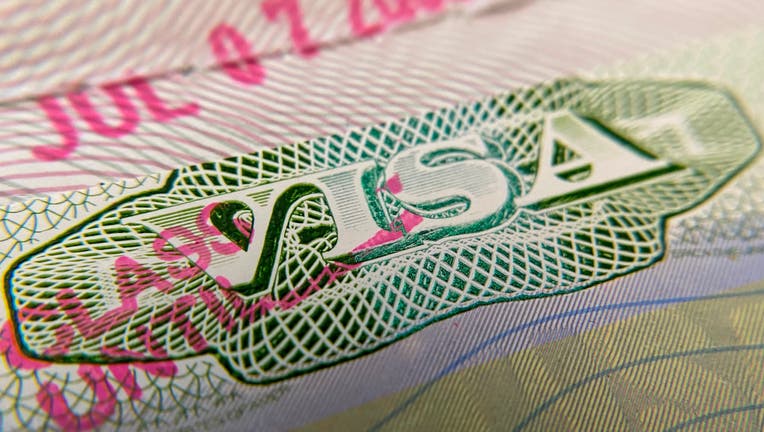 This photo illustration shows a visa stamp on a foreign passport in Los Angeles on June 6, 2020. - The United States said July 6 it would not allow foreign students to remain in the country if all of their classes are moved online in the fall over th (Getty Images)

The federal civil complaint, filed in Orange County, seeks a court order preventing the government from enforcing the policy that would strip foreign students of their U.S. visas if their fall classes are held solely online.

The plaintiffs -- identified by their initials only -- are Chinese nationals studying at UC Irvine School of Law and UCLA, and a German national attending the USC Gould School of Law.

The revised visa guidelines were announced Monday by the Student and Exchange Visitor Program, which operates on behalf of the U.S. Department of Homeland Security.

"The administration's abrupt decision to expel international students during the pandemic is gratuitously cruel to the students and would do immeasurable harm to our universities and our country," said Mark Haddad, a professor at USC Gould School of Law.

"Because this stunning policy change inflicts profound harm and yet was issued without any explanation, it is unlawful and should be swiftly blocked by the courts."

According to the lawsuit, the new policy "makes foreign students pawns in a political drama."

• ICE: International exchange students taking all online courses due to COVID-19 can’t remain in US

• California sues Trump Admin. over policy that would deprive some foreign exchange students of US visas

Because of the COVID-19 pandemic, universities across the nation began to shift to largely online classes in March to discourage bringing people together in a confined space.

At that time, international students were protected by guidance issued by the student visitor program, which kept nonimmigrant student visas in compliance regardless of how their colleges managed the shift from in-person classes.

However, as California registers some of its highest new daily cases totals since the pandemic began, SEVP rolled back its exemptions from the spring, requiring students whose schools choose to conduct the fall 2020 term entirely online to leave the United States.

"The ICE policy requiring foreign students to attend in-person classes, even where their universities have determined that to do so will cost lives and endanger the campus community, in keeping with the judgment of public health experts, treats them as pawns for the president's politically motivated decision," said plaintiffs' attorney Mark Rosenbaum, director of Public Counsel's Opportunity Under Law project.

"It is the latest of a series of irrational actions that is deepening the pandemic crisis in our nation and it comes as no surprise that the lives being threatened in the first instance are those of immigrants, here lawfully studying to contribute productively here and abroad."

Plaintiffs' counsel Stacy Horth-Neubert said the government has abruptly taken "arbitrary and illogical action that presents these students with a Hobson's choice of either subjecting themselves and those around them to the risk of infection of COVID-19 by attending classes in person, or being forced from the country in which they have planned and prepared to spend the coming academic year."