How to stop someone from bleeding out in an emergency: Tips from a doctor

Dr. Michael Jimenez from Pomona Valley Hospital Medical Center show how to treat life-threatening wounds in the event of an emergency.

LOS ANGELES - Eleven people were killed at a dance hall in Monterey Park amid Lunar New Year celebrations over the weekend. It was one of three mass shootings that occurred throughout California in recent days.

In the wake of tragedies like those in Monterey Park, Alhambra, Half Moon Bay, and Oakland, a local doctor is working to teach as many people as possible how to triage people if they're ever involved in a similar situation.

Dr. Michael Jimenez is the Medical Director of Trauma at Pomona Valley Hospital Medical Center. He has been giving classes through an initiative called Stop The Bleed, which is meant to prepare the public for worst-case scenarios, specifically if you encounter someone who's bleeding to death.

How to stop life-threatening bleeding

Dr. Michael Jimenez from Pomona Valley Hospital Medical Center teaches Elex Michaelson and Marla Tellez how to treat life-threatening wounds in the event of an emergency.

"Trauma at these tragic events are the number one killer in the United States under the age of 45," Jimenez said. "That's more than heart attacks and cancer, and even [them] combined."

The skills Jimenez teaches are meant to help in the crucial moments before first responders can get to the scene.

The first step in any situation is to contact authorities. After that, it's time to find the wound. Jimenez said if you have access to gauze, pack it into the wound "as deep as you can get it in there." Then you take more gauze, put it directly over the wound, and apply pressure. 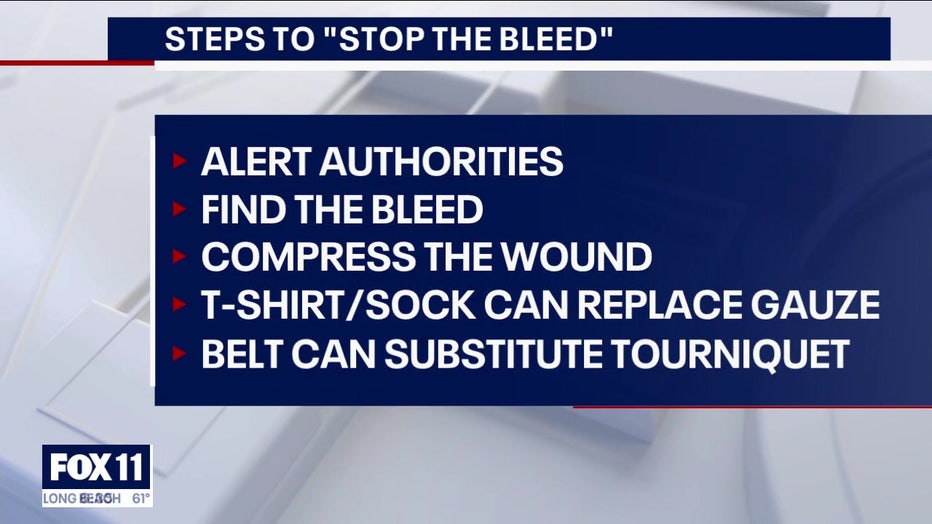 Tips from Dr. Michael Jimenez about how to stop someone from bleeding out if you're caught in an emergency.

If you don't have gauze, "you can use something as simple as your undershirt, or a pair of socks. You can take off your socks and go ahead and pack it as best you can and then put direct pressure. The key thing is to compress the artery or the vein that's causing someone to exsanguinate or bleed out."

If gauze and pressure don't work, the next step is to find a tourniquet. To use the tourniquet, you slide it over the limb, place it above the wound, cinch it tight then start to twist.

"You know how many revolutions to perform when the bleeding stops," Jimenez said. "That means you've compressed the vessels enough."

SUGGESTED: US cancer death rate has fallen 33% since 1991, report says

If you don't have a tourniquet, a belt can work as well, by cinching it tight and wrapping it around the limb. That "pulley system," as Jimenez described it, allows for the victim to hold the makeshift tourniquet tight while you apply pressure to the wound.

To keep it simple, Jimenez recommended the "ABC" of Stop the Bleed:

"Some of the best things you can do are to prepare yourself," Jimenez said. "So take the educational courses. They're very simple, and they can save lives."