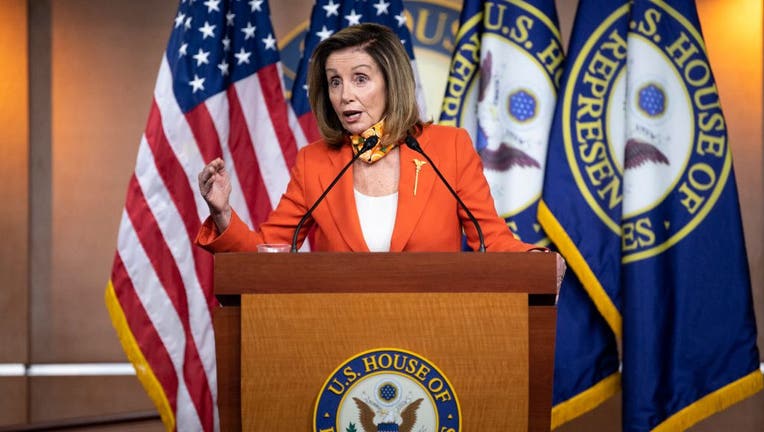 UNITED STATES - SEPTEMBER 24: Speaker of the House Nancy Pelosi, D-Calif., speaks during her weekly news conference in the Capitol in Washington on Thursday, Sept. 24, 2020. (Photo by Caroline Brehman/CQ-Roll Call, Inc via Getty Images)

WASHINGTON - House Democrats unveiled a scaled-back $2.2 trillion aid measure Monday in an attempt to boost long-stalled talks on COVID-19 relief, though there was no sign of progress in continuing negotiations between House Speaker Nancy Pelosi and Treasury Secretary Steven Mnuchin.

The latest Democratic measure would revive a $600-per-week pandemic jobless benefit and send a second round of $1,200 direct payments to most individuals. It would scale back an aid package to state and local governments to a still-huge $436 billion, send a whopping $225 billion to colleges and universities, and deliver another round of subsidies to businesses under the Paycheck Protection Program.

RELATED: If you didn’t file tax returns, the IRS may still owe you a $1,200 COVID-19 stimulus check

The proposal represents a cutback from a $3.4 billion bill that passed the House in May, but remains well above what Senate Republicans are willing to accept. Republicans have endorsed staying in the $650 billion to $1 trillion range.

Pelosi said Monday that she remains in contact with Mnuchin, with whom she negotiated several earlier relief packages. The two spoke briefly on Sunday and Monday evening and are slated to talk again Tuesday morning, according to Pelosi spokesperson Drew Hammill.

Talks over the summer broke down in acrimony and name-calling, and conversations this month haven’t produced visible progress. Even if the rival sides could agree on a “top line” figure from which to negotiate details, dozens of difficult issues would remain to be sorted out.

How to check the status of your stimulus payment

The IRS anticipates sending more than 150 million payments as part of a massive coronavirus rescue package.

For instance, Senate Majority Leader Mitch McConnell, R-Ky., is insisting that a liability shield against potential lawsuits brought against businesses, schools and universities that reopen during the pandemic be part of the legislation. Pelosi opposes the idea and didn’t include it in Monday’s legislation.

Democrats say the purpose of the new draft legislation is to show good faith and spark a more meaningful round of talks. But it also comes after party moderates and “front line” lawmakers in swing districts protested that Democratic leaders were being too inflexible.

Pelosi’s office has said she’s considering putting the new measure up for a floor vote if talks this week with the Trump administration prove fruitless.

“Democrats are making good on our promise to compromise with this updated bill, which is necessary to address the immediate health and economic crisis facing America’s working families right now,” Pelosi said in a letter to her colleagues. “We have been able to make critical additions and reduce the cost of the bill by shortening the time covered for now.”