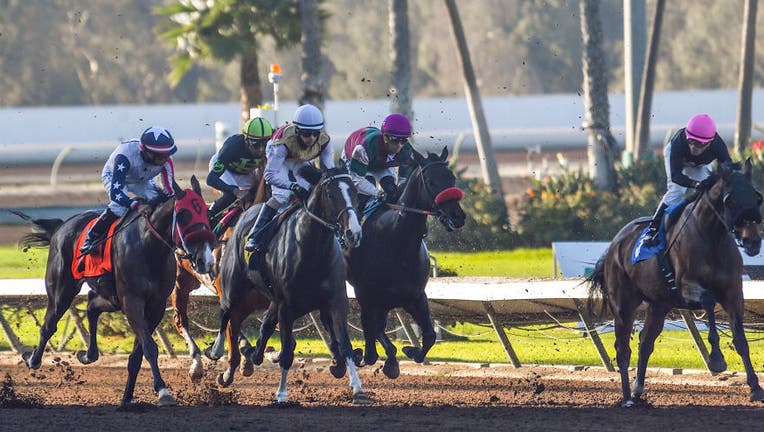 LOS ALAMITOS, Calif. - A racehorse who survived the devastating 2017 Lilac Fire that killed 46 horses at San Luis Rey Downs reportedly died from injuries he suffered while winning a race at the Los Alamitos Race Course earlier this month.

Tap the Wire, who scored $11,800 in prize money in a quarterhorse race on May 9 with jockey Mauro Donoe on his back, was euthanized, track announcer Michael Wrona confirmed late Saturday.

Video of the race shows Tap the Wire appearing to injure his right front leg a few yards before the finish line.

Replying to a Twitter user who asked if Tap the Wire had been euthanized, Wrona tweeted "Unfortunately, he was."

Tap the Wire is not listed on the California Horse Racing Board's May report of fatalities at Los Alamitos.

"After the race, this horse was shipped from Los Alamitos to a clinic near San Luis Rey Downs for treatment."

At least 14 horses have died at the Cypress track in racing or training-related incidents during this race season, which began in late December.

According to race data company Equibase, owners Allegra and John Ernstbred Tap the Wire in California, and the horse was trained by Daniel Dunham.

He also managed to escape the Lilac Fire, which swept through the facility on Dec. 7, 2017.