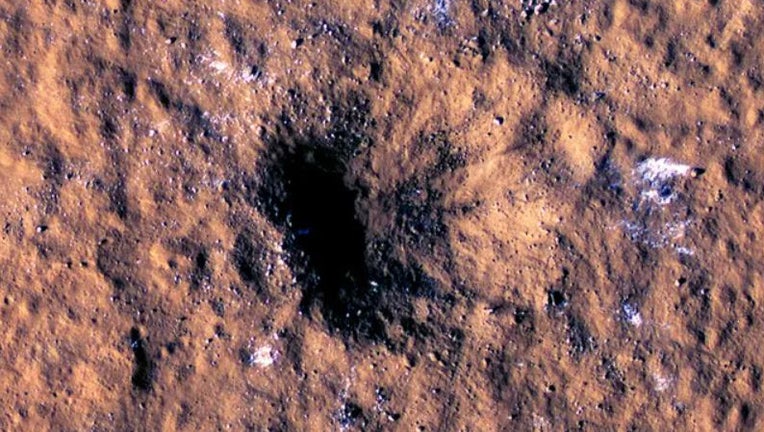 HiRISE Views a Mars Impact Crater Surrounded by Water Ice: Boulder-size blocks of water ice can be seen around the rim of an impact crater on Mars, as viewed by the High-Resolution Imaging Science Experiment (HiRISE camera) aboard NASA’s Mars Reconna

Scientists revealed Thursday that two of its Mars robots recorded a sizable quake, leaving a crater bigger than any ever recorded in the solar system.

The Mars Insight lander recorded a magnitude 4 marsquake on December 24, but scientists only recently learned the cause of that quake.

NASA said in a news conference Thursday that a meteoroid strike estimated to be one of the biggest seen on Mars since NASA began exploring the cosmos created the seismic shake felt by Insight.

NASA’s robots, the Mars Reconnaissance Orbiter and Insight Mars lander were able to measure the impact and record the sound on the Red Planet.

"The meteoroid excavated boulder-size chunks of ice buried closer to the Martian equator than ever found before – a discovery with implications for NASA’s future plans to send astronauts to the Red Planet," NASA said.

'THE BIG ONE': MONSTER QUAKE ON MARS TO PROVIDE VIEW INTO PLANET LIKE NO OTHER 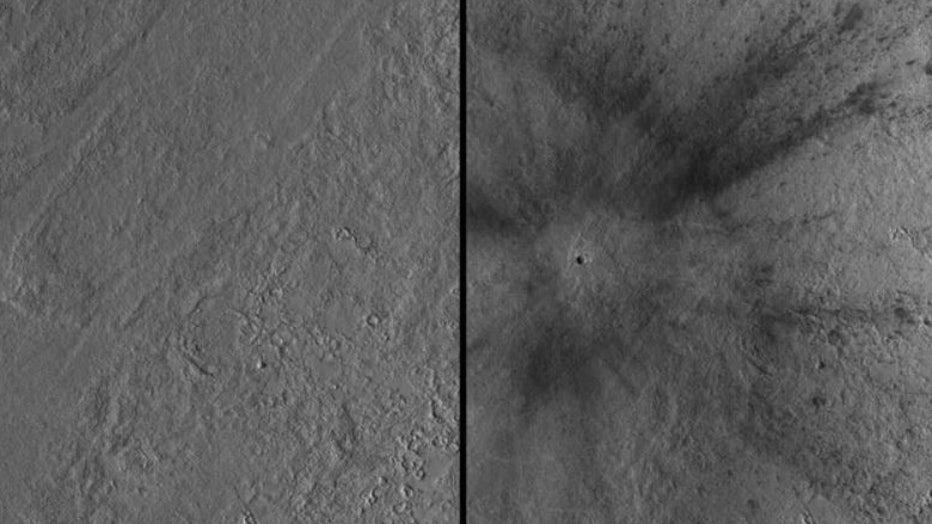 The Reconnaissance Orbiter was able to take before and after pictures but spotted the new, yawning crater. Scientists say that this was a "rare opportunity" to see how large of an impact this meteor was that shook Mars.

"When we compare seismic epicenter with location that we pinpointed from the orbit and the time we were able to match this large seismic event to our large impact crater, this is by far the largest jointly observed crater recorded seismically and observed from the image from the orbit," Liliya Posiolova said.

While the meteoroid was estimated to be upwards of 39 feet, the impact on Mars created a crater 492 feet across and 70 feet deep. The crash tossed pieces of Mars rock and dirt as far as 23 miles away.

"It's about two city blocks across. And even though meteorites are hitting the planet all the time, this crater is more than ten times larger than the typical new craters we see forming on Mars," Ingrid Daubar of Brown University said. "We thought a crater of this size might form somewhere on the planet once every few decades, maybe once a generation."

Scientists believe that this crater is one of the largest ever witnessed forming on any celestial body in the solar system.

"It’s unprecedented to find a fresh impact of this size," said Ingrid Daubar of Brown University, who leads InSight’s Impact Science Working Group. "It’s an exciting moment in geologic history, and we got to witness it."

Not only was the impact seen from high above, but the Insight lander felt it when the meteor slammed into Mars.

With its seismometer, Insight detected the seismic waves that rippled along the planet’s crust.

After a recent dust storm, InSight’s power drastically declined in recent months due to dust settling on its solar panels. The lander is expected to shut down within the next six weeks, bringing the mission to an end.