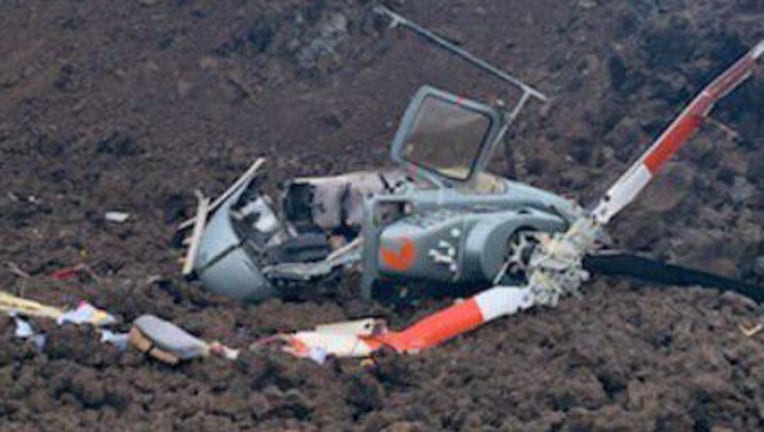 The crashed helicopter is pictured in a provided image on June 8, 2022. (Credit: Hawaiʻi Fire Department)

A tourist helicopter crashed on Wednesday in a lava field in Hawaii, injuring all six people on board who were evacuated safely from the site, officials said.

The initial report came in about 5 p.m. and said the aircraft had crashed near the southernmost tip of the Big Island, said Cyrus Johnasen, a public information officer for Hawaii County.

The helicopter was carrying a pilot and five passengers. Johnasen said the pilot, a man in his 50s, had been trapped but was later extracted and was in serious but stable condition. An 18-year-old woman was reported in serious and worsening condition. Four people were reported as ambulatory.

One of the passengers, a 48-year-old man, managed to walk from the crash site, according to KHON-TV.

Photos taken by rescuers showed the Bell 407 helicopter crashed in the lava field. The site was inaccessible by vehicle so the Hawaii Fire Department sent two helicopters to take victims to ambulances waiting on nearby roads.

The crashed helicopter is pictured in a provided image on June 8, 2022. (Credit: Hawaiʻi Fire Department)

No information was immediately released on what caused the crash.

The weather in the area about the time included winds of about 16 mph, gusts of about 23 mph, and some scattered or broken clouds, Thomas Vaughan, a meteorologist with the National Weather Service, told KHON-TV.

"Standard, afternoon weather on the Big Island," he said.