LOUISVILLE, Ky. - Harrowing bodycam footage shows the moment officers were able to track down an alleged kidnapper and rescue a 6-year-old victim.

On July 2, Louisville Metro Police Department officers were dispatched to an alleged kidnapping after witnesses saw an unknown white man, later identified as Robby Wildt, 40, take a young girl and put her into a car and drive off.

One intrepid witness called 911 as they followed Wildt’s vehicle and was able to provide a partial license number which assisted officers in Wildt’s eventual capture.

Bodycam footage worn by Officer Jason Burba shows the moments he arrived at the scene where Sgt. Joe Keeling had already apprehended Wildt who was on the ground with his hands behind his back. 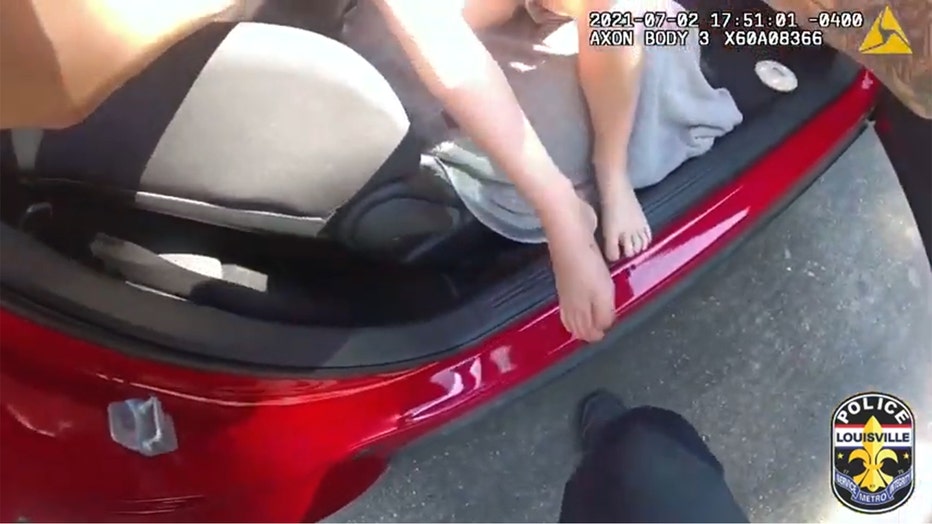 Burba then slowly made his way to the passenger side of Wildt’s vehicle and found the 6-year-old female victim inside, crying for her dad.

The officer quickly picks the child up and walks away from the scene.

"You just can’t get there fast enough," said Burba. "Seconds feel like hours. Your only thought is getting there as fast as you can."

Separate bodycam footage worn by Keeling shows the moment the officer was able to track down Wildt and arrest him in front of a residence before Burba rescued the young girl.

Video footage shows Keeling exit his patrol car as a man, believed to be Wildt, opens the driver’s side of a red Dodge Challenger.

Keeling is heard telling the driver to "stay right there" as he alerts dispatch of his location.

Keeling then orders the man, who is wearing a backward cap and a red T-shirt to get on his knees with his hands in the air.

As more patrol cars pull up to the scene, Keeling proceeds to put the man in handcuffs.

RELATED: Arrival of registered sex offender in Oakley has neighborhood in an uproar

Wildt did not know the girl prior to taking her, according to an incident report. Officers also noted that while questioning Wildt, he kept reiterating how badly he felt for taking the girl and realized what he had done was wrong.

The entire incident lasted about 30 minutes, according to police.

"This is a rare situation, stranger kidnapping. More commonly we see custodial issues as kidnappings. Although we do not want the community to be alarmed, this is certainly an educational opportunity for parents to remind their children that ‘stranger danger’ is real. It is important to talk to your kids about any adult who tries to use a ruse to lure them to their vehicles or away from public view," according to a department statement.

Wildt, who was charged with kidnapping a minor, has pleaded not guilty.