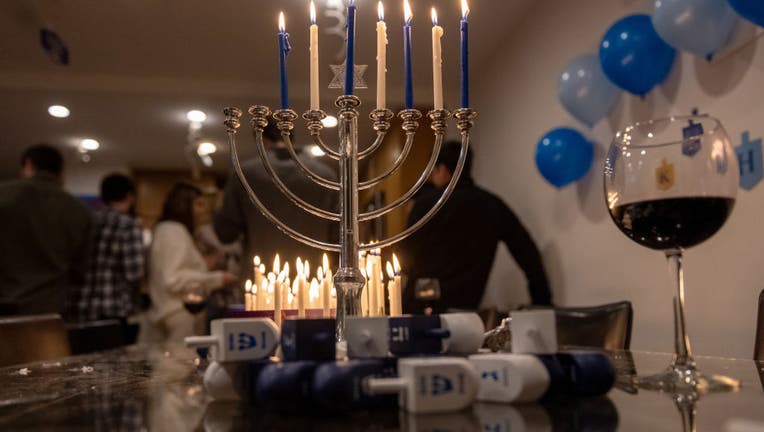 FILE: Menorahs are lit during a party on the 6th night of Hanukkah in New York City. (Photo by Alexi Rosenfeld/Getty Images)

LOS ANGELES - Mayor Karen Bass is set to light a menorah at a family street fair and carnival in the Pico-Robertson district Sunday to mark the start of Hanukkah at sundown.

Pico Boulevard will be closed between Doheny Drive and Livonia Avenue for the event, which will begin at noon. The menorah lighting will be held at 5 p.m. followed by a concert.

It is being organized by Chabad of California, part of the Hasidic Chabad-Lubavitch movement, which tends to the spiritual and material needs of all Jews.

The menorah lighting will be the second in four days for Bass. She was among the elected officials speaking at menorah lighting at Grand Park in downtown Los Angeles Thursday organized by the Jewish Federation of Greater Los Angeles, part of Shine A Light, an international effort by The Jewish Federations of North America to respond in solidarity to the dramatic rise of antisemitism, racism and all forms of hate.

The effort seeks to unite the Jewish community with its allies in one positive voice.

"I grew up in the Jewish community in the Fairfax district and I cherish those deep connections that all go the way back to my childhood," Bass said Thursday. "I've seen both the beauty of sharing faith traditions and the problems when people demonize each other for what they believe in."

Bass noted the Dec. 7 release of the Los Angeles County Commission on Human Relations' 2021 hate crime report, wich found there were 786 hate crimes reported in the county in 2021, the largest number since 2002 and a 23% increase from 2020.

"As I have done repeatedly throughout my life, I continue to pledge to work tirelessly to combat antisemitism, especially in our City of Angels," Bass said. "I hope that all of Los Angeles will join me in seeking to build a city filled with love, acceptance, belonging and community where neighbors come out for one another and strangers help each other out."

Other free public menorah lighting ceremonies scheduled for Sunday include:

Hanukkah commemorates the temple rededication that followed the Maccabees' victory over a larger Syrian army.

Once the Jews defeated the Hellenist Syrian forces of Antiochus IV in 165 B.C. at the end of a three-year rebellion, the temple in Jerusalem, which the occupiers had dedicated to the worship of Zeus, was rededicated by Judah Maccabee, who led the insurgency begun by his father, the high priest Mattathias.

According to the story of Hanukkah, Maccabee and his soldiers wanted to light the temple's ceremonial lamp with ritually pure olive oil as part of their rededication but found only enough oil to burn for one day. The oil, however, burned for eight days in what was held to be a miracle.

Hanukkah — which means "dedication" in Hebrew — is observed around the world by lighting candles in a special menorah called a Hanukkiah each day at sundown for eight days, with an additional candle added each day.

The reason for the lights is so passersby should see them and be reminded of the holiday's miracle.

Other Hanukkah traditions include spinning a dreidel, a four-sided top, which partially commemorates a game that Jews under Greek domination are believed to have played to camouflage their Torah study, and eating foods fried in oil, such as latkes, pancakes of grated raw potatoes and jelly doughnuts.

Children receive Hanukkah "gelt" (the Yiddish word for money) from parents and grandparents. The tradition originated with 17th-century Polish Jews giving money to their children to give their teachers during Hanukkah, which led to parents also giving children money.

In the United States, the practice has evolved into giving holiday gifts to children and others.