An employee of the beer company opened fire on campus Wednesday, killing five fellow workers before turning the gun on himself.

The gunman was identified as a 51-year-old Milwaukee man who died of a self-inflicted gunshot wound, police said.

“There were five individuals who went to work today, just like everybody goes to work, and they thought they were going to go to work, finish their day and return to their families. They didn’t — and tragically they never will,” Milwaukee Mayor Tom Barrett said.

Authorities offered no immediate motive for the attack. All five victims were Coors employees and no other people were injured in the shooting, police said.

The identities of the victims were not released pending notification of their families by authorities.

“What has happened is there was a horrific shooting that has occurred," Barrett told reporters. "We’re urging all residents and people in this area to stay away from this area... They’re continuing their sweep to make sure there is nothing more that’s occurring. It is a horrible, horrible day for the employees here. It’s a very rough day for anyone who is close to this situation.”

President Donald Trump addressed the shooting before speaking at the White House with reporters about steps his administration is taking to combat the coronavirus. He said the attacker killed five people and wounded others.

Police tweeted that there was no longer an active threat. Authorities did not immediately release further details about the shooter or how the shooting unfolded.

Hours earlier, around 2:08 p.m. CT, Milwaukee police were called to what they called a “critical incident” on the Molson Coors Brewing Co. campus, police said.

Molson Coors spokesman Martin Maloney said there was an “active situation” but didn't have further details at the time. There was a heavy police presence in the area, along with fire trucks and ambulances. Live video showed an officer in body armor getting an assault rifle out of car.

The Bureau of Alcohol, Tobacco, Firearms and Explosives in Chicago tweeted that they were "responding to the scene of an active shooter at the MIllerCoors Building in Milwaukee, WI." The FBI was also responding.

The incident occurred at a sprawling campus that includes a mix of corporate offices and brewing facilities. At least 600 people work at the complex, which is widely known in the Milwaukee area as “Miller Valley," a reference to the Miller Brewing Co. that is now part of Molson Coors.. Emergency crews continued to arrive at the scene nearly two hours after the initial call to police. 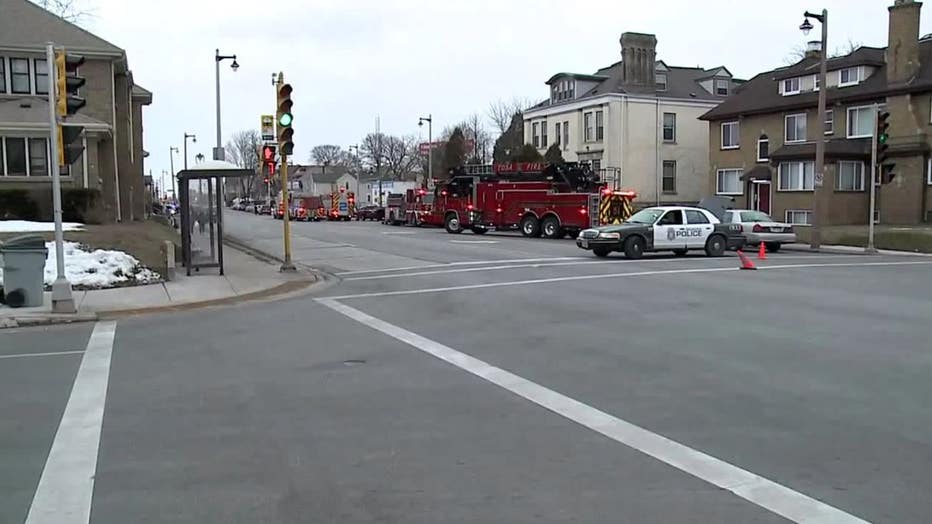 Police cordoned off an area near the Molson Coors Beverage Company complex in Milwaukee Wednesday amid what they called a "critical incident." (FOX6 Milwaukee)

FOX6 in Milwaukee posted a photo of an employee's phone screen with an apparent company text message alerting employees to an "active shooter on campus" and urging them to "find a safe place."

Another MillerCoors employee told FOX6 that she and her colleagues were placed under lockdown amid an “intense situation.” The employee shared video with the local FOX afiiliate of police arriving at the scene and said that she and her coworkers were not immediately allowed to leave the campus.

According to FOX6, a nearby public school was also temporarily placed on lockdown, along with a local Humane Society location before students and employees were cleared to leave.

James Boyles told the Milwaukee Journal Sentinel that his wife, Lasonya Ragdales, works at Molson Coors in the claims department. She was texting from inside the building and told her husband that there was active shooter and she was locked in a room with a bunch of co-workers, the Journal Sentinel reported.

Wisconsin Gov. Tony Evers was on the scene with authorities. Attorney General Josh Kaul called the shooting “gut-wrenching." Wisconsin Sen. Ron Johnson tweeted that he was monitoring the "frightening situation at an iconic Milwaukee brewery."

"Prayers go out to everyone affected," he said.

Traffic was diverted around the area as police established a media staging area nearby. Milwaukee police asked that people stay clear of the area and that no helicopters or drones be flown over the "active" site for “officer safety purposes.”

“Miller Valley” features a 160-year-old brewery, with a packaging center that fills thousands of cans and bottles every minute and a distribution center the size of five football fields.

The facility is also home to corporate customer service, finance, human resources and engineering. Tours take people to underground caves where beer was once stored, a saloon with intricate woodwork, a stein hall with stained-glass windows, a champagne room meeting hall with leaded-glass windows, and an outdoor beer garden that can hold 300 people.

Before Wednesday's shooting, there had been three mass killings nationwide in 2020, with 12 total victims. All have been shootings. In 2019, there were 44 mass killings, with 224 total victims. The Associated Press/USA TODAY/Northeastern University Mass Killings database tracks all U.S. homicides since 2006 involving four or more people killed over 24 hours regardless of weapon, location, victim-offender relationship or motive.

The last mass shooting in the Milwaukee area was in August 2012. when white supremacist Wade Michael Page fatally shot six people and wounded four others at a Sikh temple in suburban Oak Creek. Page killed himself after being wounded in a shootout with police. The worst mass shooting in the area in the past 20 years was in 2005, when seven people were killed and four wounded.at a church service in Brookfield, a Milwaukee suburb. The shooter killed himself.