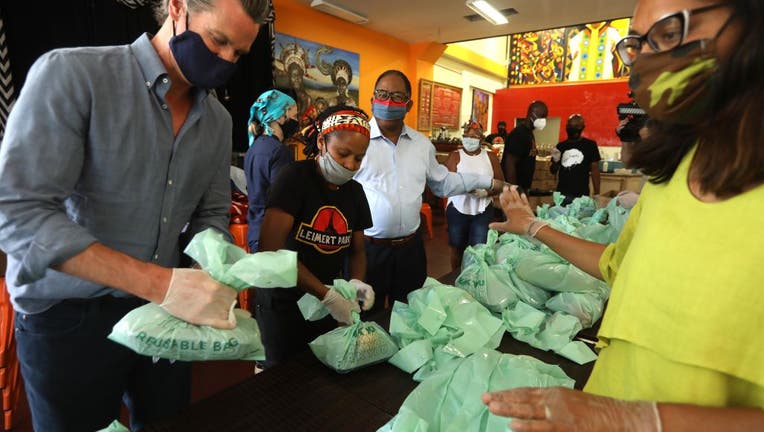 LOS ANGELES - Millions of low-income Californians would get a $600 payment from the state under a budget proposal by Gov. Gavin Newsom.

The proposed payment, announced Wednesday, would go to people with annual incomes of less than $30,000, including immigrants living in the country illegally who file taxes with the state. Roughly 4 million people would be eligible for the payment, for a total state cost of $2.4 billion. Newsom is also asking the Legislature to extend a moratorium on evictions.

"Californians who have been impacted by this pandemic will get help to provide for their families and keep a roof over their heads," he said in a statement.

State lawmakers normally pass the budget in June, but Newsom is asking them to act early on several proposals to provide faster relief to people suffering due to the coronavirus pandemic. California’s unemployment rate was 8.2% in November, the most recent month with available state data. But that doesn’t reflect the true number of out-of-work Californians, as many people have stopped seeking work.

The $600 payment matches a federal stimulus payment approved by Congress, meaning some Californians could receive $1,200 in relief.

Newsom hopes payments of the state stimulus go out to Californians in February and March. If his plan is approved and signed into law, it will take three to four weeks to get payments out to people who filed their taxes electronically, said H.D. Palmer, spokesman for the California Department of Finance.

Taxpayers who received the California Earned Income Tax Credit, available to people making less than $30,000 annually, last year would receive the $600 payment. That covered about 3.9 million filers in 2020, Palmer said.

The $600 payment would also go to people with Individual Taxpayer Identification Numbers who would be eligible to receive the tax credit this year. Those taxpayers are mostly immigrants living in the country illegally. The state estimates about 125,000 of those filers would be eligible for the payment, Palmer said.

Beyond the cash payments, Newsom’s proposal aims to help Californians struggling to pay rent or losing out on money that would normally come in from tenants. The Legislature passed an eviction moratorium last year, and it bars landlords from evicting people who suffered economic loss due to the pandemic. They must be able to pay at least 25% of their monthly rent.

Newsom wants to extend the moratorium, though his office did not give a proposed extension date.

The governor will announce his full budget proposal on Friday, but he’s already revealed other pieces aimed at aiding people financially harmed by the coronavirus pandemic. On Tuesday he proposed $4 billion in spending aimed at aiding small businesses and creating jobs. He also proposed $2 billion to help schools reopen for in-person learning.