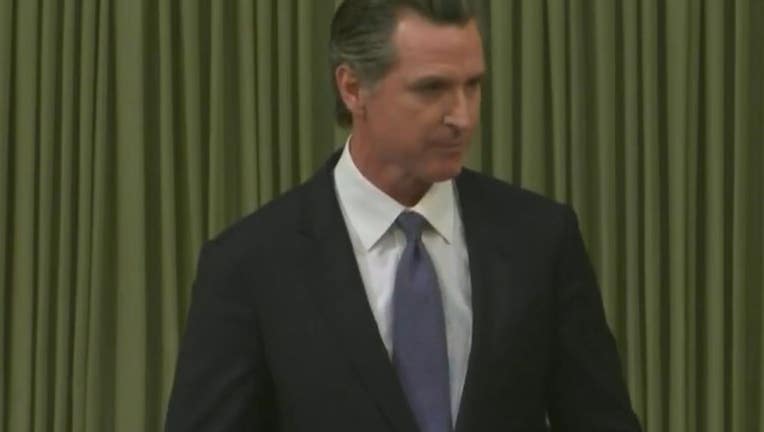 He took the unusual step of devoting most of the annual speech to just two related issues: affordable housing shortfalls and homelessness. They have quickly eclipsed the state’s other problems since the Democratic governor took office a year ago.

He called it "a disgrace, that the richest state in the richest nation ... is falling so far behind to properly house, heal and humanely treat so many of its own people."

While homeless populations in most states have declined recently, California’s jumped 16% last year to about 151,000 people, a problem that the governor said disproportionately affects minorities. Meanwhile, a statewide housing shortage has compounded the issue, driving up prices and contributing to more people fleeing California than moving in, the first time in 10 years the state has had a migration loss.

Newsom proposed lowering the threshold for conservatorships for those with mental illnesses, particularly for those experiencing homelessness who turn down medical aid. He said that current laws set a “too high” threshold for compelling individuals to go into community treatment centers.

California must act “within the bounds of deep respect for civil liberties and personal freedoms, but with an equal emphasis on helping people into the life-saving treatment that they need at the precise moment they need it,” he said in a 42-minute livestreamed address from the ornate Assembly chamber.

However, he said, "clearly it is time to respond to the concerns of experts who argue that thresholds for conservatorships are too high and should be revisited."

Homelessness has been a catalyzing issue in California politics, with public opinion polls showing it at the top of voters’ priority lists.

Republican President Donald Trump has frequently criticized California for its homelessness woes, saying the Democratic-led state can’t handle the crisis and blaming it for other state problems, including poor water quality in the San Francisco Bay.

Trump again chided Los Angeles leaders on Tuesday during a visit to Southern California for failing to stem that city’s homelessness epidemic, warning that the federal government will intervene if Los Angeles doesn’t  "clean it up fast."

A law Newsom signed last year authorized San Francisco to expand its conservatorship authority, a program that the city is still setting up. Civil rights groups are concerned with expanding conservatorship programs.

"We need more housing, not more delays," he said.

The California Environmental Review Act requires most construction projects to submit to a strict analysis of how it would impact the environment. Such reviews can delay projects and give opponents ample opportunity to derail proposals.

Republican Assemblyman Vince Fong of Bakersfield said cutting red tape is something Republicans have been urging for years.

But Democratic Assemblyman David Chiu of San Francisco warned that the governor’s proposals will face opposition from those who don’t want shelters or low-income housing in their backyard. That reluctance "has a chokehold on our politics and has caused us to under build for decades," he said in a statement.

Aside from conservatorships, Newsom called for overall better mental health care to help the state’s homeless population with a larger focus on behavioral health. That’s a broader approach that includes not just mental well-being but also addresses interrelated physical challenges such as drug and alcohol abuse or poor diet and exercise.

“Health care and housing can no longer be divorced,” he said. “After all, what’s more fundamental to a person’s well-being than a roof over their head?”

Newsom announced that more mobile housing trailers are heading to Santa Clara, Riverside, Contra Costa, and Sonoma Counties, as well as the city of Stockton, after the temporary shelters were previously sent to Oakland and Los Angeles County. And he said the state is making available 286 state properties, including vacant lots, fairgrounds, armories and other state buildings, to be used by local governments to help the homeless.

This year, Newsom wants to spend another $750 million combating homelessness and wants to give the money to as yet unnamed regional administrators instead of local governments. The independent Legislative Analysts’ Office has criticized that approach, saying it likely won’t have a meaningful impact.

Newsom counters that the homelessness problem is so bad the state needs to try something different. Earlier this year, he sent camping trailers from the state fleet to cities in need and ordered excess state land to be used for temporary shelters.

He’s asking state lawmakers for nearly $700 million, doubling to $1.4 billion by 2022 including federal funds, to shift the focus of California’s Medicaid program that provides free or low-cost medical services. He wants state and local emphasis on preventative health care, but with a broad approach that could include non-traditional assistance in finding housing, even providing rental assistance if homelessness is linked to heavy use of expensive health care services.

The governor also created a state and local “behavioral health task force” to look at the link between mental illness and substance abuse.

Newsom again stopped short of endorsing a “right to shelter,” which would require communities to have enough housing to handle all their homeless. Instead of creating such a legal mandate, Newsom said it is better for the state to work cooperatively with local governments.

He called for some changes to a tax on millionaires approved by voters in 2004 to help those with mental illness who are homeless, among other efforts, and called on counties to spend the $160 million they already have from the tax more quickly.

"Spend your mental health dollars by June 30, or we’ll make sure they get spent for you," he warned county leaders. "It’s time to match our big-hearted empathy with tight-fisted accountability."