The post read, “Congratulations Amy Coney Barrett on becoming the 5th woman appointed to the Supreme Court since its inception in 1789.”

It featured a photo of other female justices, including the late Ruth Bader Ginsburg, whose seat Barrett filled, and Sonia Sotomayor.

After deleting the post, Girl Scouts tweeted, “Earlier today, we shared a post highlighting the five women who have been appointed to the Supreme Court. It was quickly viewed as a political and partisan statement which was not our intent and we have removed the post.”

“Girl Scouts of the USA is a nonpolitical, nonpartisan organization. We are neither red nor blue, but Girl Scout GREEN. We are here to lift up girls and women,” the organization added.

The post itself received criticism from some social media users, while some praised the organization.

Actor Amber Tamblyn tweeted a scathing rebuke of the organization, writing, “This tweet is really disappointing and won’t age well when access to safe abortion and the healthcare needs of millions of women and girls is gutted in this country because of Barrett’s addition to the court.”

The Independent Women’s Forum, a nonprofit conservative group, expressed disappointment in the removal of the post.

“Of course the @girlscouts (https://twitter.com/girlscouts) caved to the mob and deleted this tweet congratulating Amy Coney Barrett. SAD,” the group wrote. 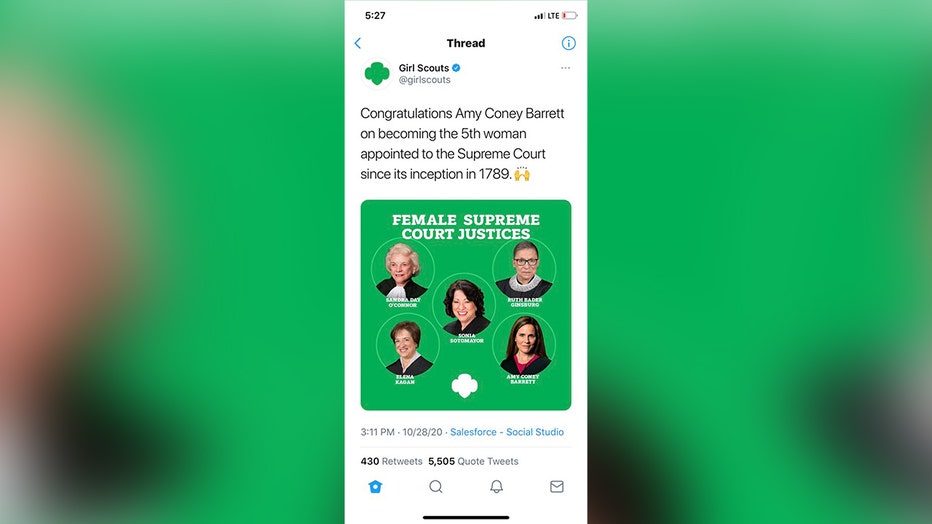 Screenshot of deleted tweet by the Girl Scouts of America.

Barrett’s ascension to the Supreme Court tips the balance to a 6-3 conservative majority likely for years to come.

The reliable conservative is known for her rulings on hot-button legal issues from abortion to gun control and is hailed by religious conservatives. But liberals have argued that Barrett’s legal views are too heavily influenced by her religious beliefs and fear her place in the nation’s highest court could lead to a scaling back abortion rights as well as a vote to undo the  “Obamacare” law — which provides more than 20 million Americans health insurance coverage.

Judge Amy Coney Barret on being dubbed a female Scalia

Senate Judiciary Committee Chairman Lindsey Graham, R-S.C., who is presiding over the hearings, asked Barrett about her comparison to the late Justice Antonin Scalia. The conservative judge was a mentor of Barrett’s.

During testimony earlier this month, Barrett presented herself as a judge with deeply held religious beliefs, but vowed to approach each case with an “open mind.” A devout Catholic, the appellate judge promised to bring no personal agenda to the high court.

Barrett has remained neutral on many issues, asserting it's against judicial code to say whether she would overturn the Affordable Care Act or how she would vote on other politically fraught issues, including abortion.

Kelly Taylor Hayes and the Associated Press contributed to this story.