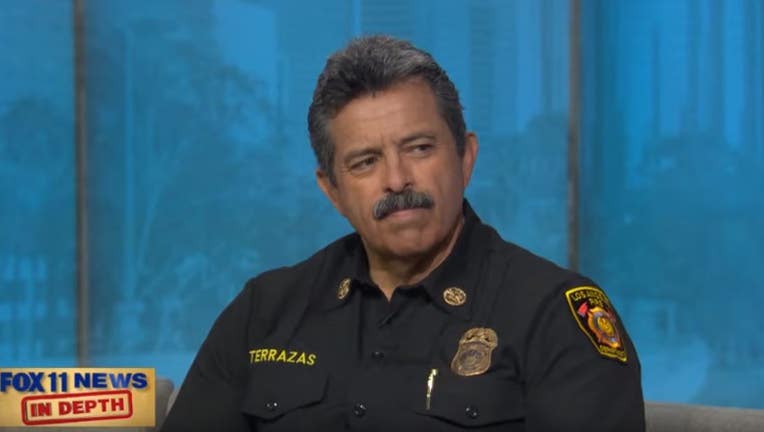 LOS ANGELES - This week's In Depth is all about The LA City Fire Chief, Ralph Terrazas.

While urban sprawl and changing weather conditions have made firefighting more difficult in the city of LA, the department has grown and adapted to meet the challenges. LA City Fire Chief Ralph Terrazas is a 35 year veteran of the LA City fire department.

How Firefighting has changed.While urban sprawl and changing weather conditions have made firefighting more difficult in the city of L.A, the department has grown and adapted to meet the challenges.

LA City Fire Chief Ralph Terrazas is a 35 year veteran of the L.A. City Fire Department. He has served as chief for five years.Terrazas says during the city’s sometimes extended fire season, the department monitors the weather every day and during dangerous conditions they pre-deploy resources to be prepared.

Terrazas says leasing aerial equipment like the air crane is more efficient than buying it.

New Fire Techniques and Equipment.The fire chief says that they coordinate with other fire department chiefs by text messages, speeding up calls for assistance, because the fires move too fast for delays.

New technology is in use to capture aerial images of the fire. They are coordinating with UC San diego on a sophisticated computerized projection system that predicts where a brushfire will spread and how fast.

The fire department is also using drones, and planning to expand that system. They use drones with infrared cameras to fly over and find hot spots that still need to be extinguished.

Then they can ground the helicopters and save that fuel and just use the drones for spotting.

Terrazas also discusses other new firefighting techniques, including a tool he, himself invented and got a patent on to predict where fires would spread.

He talks about the department expanding into telemedicine to help deal with expanding call load on paramedics, due to expanding population in the city.

The Fire Chief talks about what citizens can do to help themselves. Know about brush clearance and  “Ready, Set, Go” program.