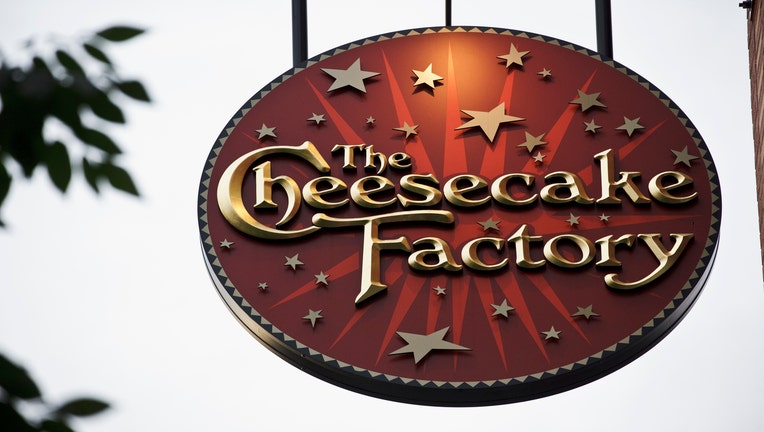 The Cheesecake Factory at Blue Black Square in the West Hartford Center. (Photo by James Leynse/Corbis via Getty Images)

LOS ANGELES - A former longtime Cheesecake Factory server is suing the Calabasas-based restaurant chain, alleging she was fired in April for complaining that a manager made disparaging comments about Latino kitchen workers that wove in remarks about President Trump's border wall.

Andrea Nichole Duenas, who is herself a Latina, maintains in her Los Angeles Superior Court lawsuit that she protested when she heard the white kitchen manager at the Thousand Oaks location tell Latino line cooks, "Give me fries stacked high and tall like the wall Trump is going to build."

Duenas also believes that Latino cooks "appeared to be working off-the-clock more than ... Caucasian employees," according to her complaint, which alleges retaliation and wrongful discharge.

A Cheesecake Factory representative did not immediately reply to a request for comment on the suit, which was filed Monday and seeks unspecified damages..

Duenas says she was hired by the Cheesecake Factory in April 2008 and worked as a server and trainer. She first heard disparaging remarks directed toward her Latino colleagues last September or October, the suit alleges.

Duenas met with the restaurant chain's area director and told him she believed the alleged mistreatment of Latino kitchen employees was racially motivated and that it could "soon have a domino effect on other servers and Hispanic employees," and he promised to look into the matter and make changes, according to her court papers.

However, the kitchen manager continued to make inappropriate remarks to Latino employees, the suit alleges. When Duenas asked the manager what she meant when she told her workers to "Give me some fries, Trump style," the manager responded, "You know, fries stacked high and tall like the wall Trump is going to build," the suit alleges.

After Duenas told the manager the remark was offensive, the manager replied, "Oh, I guess I'm sorry," according to the suit.

Duenas complained to two other managers, but both were friends of the kitchen manager and they laughed at the plaintiff, the suit says. The kitchen manager was eventually transferred to the Cheesecake Factory's Sherman Oaks restaurant, but received no discipline, according to the complaint.

Meanwhile, Duenas' work hours were reduced and she was suspended indefinitely in March after being told she made an erroneous use of a promotional coupon for a free slice of cheesecake, the suit says. Other employees who made the same error were given written warnings, but were not suspended, according to the plaintiff.

Duenas says she received a copy of her personnel file from the Cheesecake Factory in April and the contents stated she was fired that month for the mistake with the promotional coupon. She says she received her final check in May.

Duenas says she wrote a lengthy letter to the restaurant's human resources department in April, explaining her concerns and her actions regarding the promotional coupon. A copy of the correspondence was attached to the suit, in which she wrote: "I value my job, being that this is my sole

income for my son and I. I will not have my reputation tarnished over a couple slices of cheesecake."

Since her firing, Duenas has suffered financial losses as well as emotional distress, the suit states.