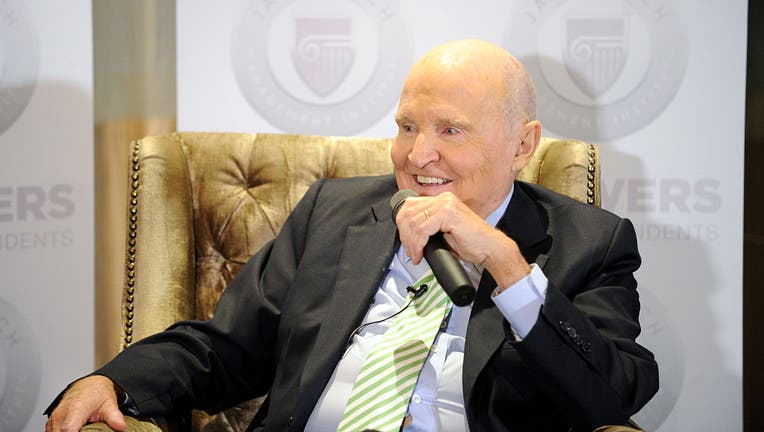 Jack Welch led General Electric Co. through two decades of unparalleled growth and transformation, with a brash style that single-handedly remade the conglomerate and changed the landscape of American corporations. He died Sunday at age 84.

Mr. Welch's success, driven by a hard-nosed strategy to slash less profitable businesses and unproductive employees, made him an international celebrity in the 1980s and drove GE to become the most valuable U.S. company during the 1990s. He groomed a generation of business leaders who went on to run giants such as Boeing Co. and Home Depot Inc.

He is survived by his third wife, Suzy, and four adult children from his first marriage. He married Suzy, a former Harvard Business Review editor, in 2004 after a highly public divorce from his second wife. The couple started an online M.B.A. program and co-wrote several business books.

He is survived by his third wife, Suzy, and four adult children from his first marriage. He married Suzy, a former Harvard Business Review editor, in 2004 after a highly public divorce from his second wife. The couple started an online M.B.A. program and co-wrote several business books.

GE traces its roots back more than century to Thomas Edison and John Pierpont Morgan, but the modern GE was built by Mr. Welch. He was nicknamed "Neutron Jack" because he eliminated some 100,000 jobs in his early years as chief executive and insisted that managers systematically fire their worst performers. He pressured GE workers around the globe to drive themselves to ever-more-demanding efficiency standards.

"My job is not to know everything about each business," he told The Wall Street Journal in 1999. "It is to pick the people who will run the business and to decide how much money business A versus business B or C gets."

He took a similar view of GE's businesses with his "fix it, close it or sell it" approach. He insisted GE exit markets where it wasn't a leader. He oversaw nearly 1,000 deals over his 20 years as CEO, including the acquisition of RCA Corp., which added the NBC broadcast network, and the sale of GE Aerospace to Martin Marietta Corp.

Under Mr. Welch, GE became known for consistent profit performance and a surging stock price. Much of those gains came from GE Capital, the finance arm that ballooned under Mr. Welch and would almost destroy the company during the 2008 financial crisis.

GE's profit has plunged in recent years, dragged down by hidden costs in the company's Capital unit and losses in the core Power business. The troubles have prompted the company to break itself apart, overhaul its leadership and slash its once-generous dividend. GE's share price tumbled roughly 75% in 2017 and 2018, erasing $200 billion of wealth for millions of investors.

In his later years, Mr. Welch witnessed the GE he built get dismantled. The decline of the company pained him, according to friends, and he sometimes said he gave himself an A for his execution of its operations, and an F for his choice of successor.

"I'm terribly disappointed. I expected so much more," he said in a December 2017 interview. "I made the best choice I thought I could make and it didn't turn out right." Mr. Welch, however, added that he was still hopeful that new leaders would build a "new GE."

"He was an incredible leader who drove communication from the top to every employee," said Wendy Peters of Bluffton, S.C. She worked 15 years in accounting and customer-relations roles at GE while Mr. Welch was chief executive. She considers meeting him once at GE's training center a highlight of her career.

Others said he was too focused on the short-term. "There was far too much emphasis on the cult of leadership at GE," said John Sutton of Boston, an investor in the company for years.

At 5' 7", Mr. Welch wasn't tall but was intimidating all the same with his New England accent and a stammer he fought since childhood. He enjoyed arguments with a macho sense of competition and humor that led to ribbing of colleagues. But former executives remember how his blue eyes could pierce through a crowd when he had something important to say.

"You can't even say hello to Jack without it being confrontational," Ralph D. Ketchum, the former head of GE's lighting business, told the Journal in 1988.

Mr. Welch's methods produced results, and his GE had a knack for beating Wall Street's financial expectations. GE's total shareholder return, which includes dividends, rose about 5,000% during his tenure, or about 21% a year, compared with a roughly 1,400% increase in the S&P 500 index over the same period, or about 14% a year, including dividends, according to data compiled by Ned Davis Research.

Mr. Welch once vowed that he would make GE "the most competitive company on earth." Under his leadership it became the largest company in America, switching from manufacturing toasters and television sets to fostering faster-growing businesses such as the NBC media business and the in-house financial arm, GE Capital.

John Francis Welch Jr., was born on Nov. 19, 1935, as the only son of a railroad conductor and a homemaker. His father worked long hours and he was close to his mother. The Irish Catholic family lived in Salem, Mass., where Mr. Welch was captain of the high-school ice-hockey team and was the only member of his family to graduate from high school.

He joined GE in 1960, at age 24, as an engineer in the plastics division. Early in his career, Mr. Welch got a powerful lesson in management when a Pittsfield, Mass., plant under his supervision accidentally blew up. No one was hurt but the damage was substantial. A dreaded follow-up visit to his bosses in Connecticut turned out to be supportive, helping Mr. Welch learn from the mistake.

He was promoted to general manager of the plastics business in 1968. He climbed the corporate ladder to vice president of GE in 1972, senior vice president in 1977 and vice chairman in 1979. In his mid-40s, in 1981, he became GE's youngest-ever chairman and chief executive.

In his first four years as CEO he cut one-quarter of GE's workforce through layoffs and the sale of businesses. He changed the planning processes, management structure and how people were assessed and compensated. He took a personal role in many of the changes, including participating in hundreds of performance reviews and determining who received stock-option grants.

Unlike his successor, Mr. Immelt, Mr. Welch benefited from the timing of his tenure atop GE. He rode a strong global economy and a soaring stock market, but still brought the industrial giant through rapid changes and global trends that capsized many other companies.

The results were tangible. In 1980, when he took over, GE's revenue was $27 billion. It was $130 billion two decades later, when he retired. The market valuation of the company rose from $14 billion to $410 billion over that period.

He also had his share of controversies, including significant government fines related to overstating costs in the 1980s and a bond-trading scandal at the former Kidder Peabody & Co. investment-banking unit in the 1990s.

GE was also forced to pay more than $1.5 billion to dredge portions of the Hudson River in upstate New York where the company had dumped chemicals before they were banned. His final deal as CEO, a proposed $45 billion acquisition of rival Honeywell International Inc., was derailed by regulators.

His divorce from his second wife, after his retirement, revealed $2.5 million of annual postretirement perks such as corporate-jet use and country-club memberships, prompting an investigation by the Securities and Exchange Commission. Mr. Welch eventually agreed to relinquish the benefits.

Still, being CEO of GE brought great joy, Mr. Welch said in his 2001 memoir "Jack: Straight from the Gut."

FOX Business' Kristina Partsinevelos and Julia Limitone contributed to this report. Get updates on this story from foxbusiness.com.