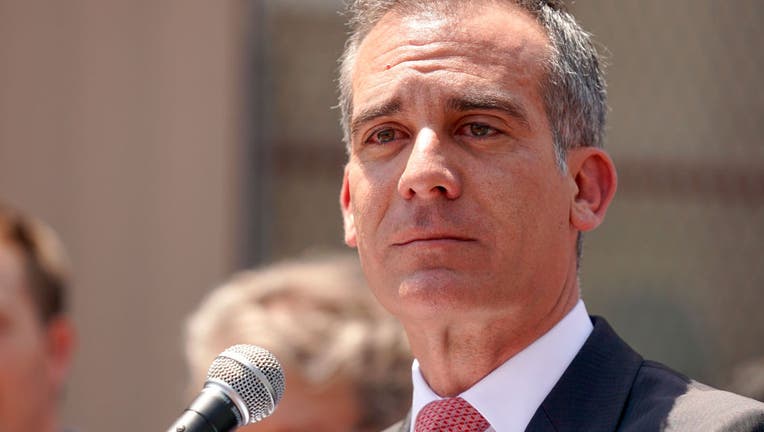 LOS ANGELES - The nonprofit law firm Whistleblower Aid filed a complaint on behalf of Los Angeles Mayor Eric Garcetti's former communications director accusing the mayor of perjury for claiming he was unaware of alleged sexual harassment and assault by his former senior adviser.

The mayor, who has been nominated to be the ambassador to India by President Joe Biden, was questioned during his nomination hearing in the U.S. Senate Foreign Relations Committee about the sexual harassment allegations against his former adviser Rick Jacobs. Jacobs was accused in a 2020 lawsuit filed by Los Angeles Police Department Officer Matthew Garza, who claims Garcetti witnessed the misconduct but turned a blind eye to it.

Garcetti has denied the allegations in the past — and did so again during his hearing, telling the Senate panel he has a "zero tolerance" policy for sexual harassment.

The mayor has previously claimed that he didn't know about Garza's accusations at the time or until the lawsuit became public in July 2020.

The complaint filed last week alleges that Garcetti committed felony perjury on Feb. 8, 2021, during his deposition as part of the lawsuit, and on Dec. 14, 2021, when he told the Senate committee under oath that he "never witnessed nor was it brought to my attention the behavior that's being alleged."

The committee in January advanced the nomination, which will next have to be confirmed by a majority of the U.S. Senate.

Whistleblower Aid filed the complaint on behalf of Naomi Seligman, a former director of communications for Garcetti who says she was forcibly kissed by Jacobs and that Garcetti knew about Jacobs' alleged pattern of harassment.

The mayor's office did not immediately respond to a request for statement, but it told the Los Angeles Times:

"There is nothing new here -- and these false claims about the mayor are just as ridiculous now as they were when they were first made. The mayor stands by his testimony unequivocally, and more than a dozen witnesses have testified under oath that he was never made aware of any improper behavior."

The complaint includes a previously reported on photo of Garcetti and Jacobs from 2017, in which Jacobs' hand is in front of another man's genital area.

"A picture is worth a thousand words," the complaint alleges. Garcetti, the letter notes, denies having seen Jacobs' hand's placement during the photo.

"The materials lay out in precise detail not just the extent of Rick Jacobs' misconduct, but also the repeated opportunities Eric Garcetti had to intervene and the specific instances in which he lied under oath about what he knew," said Whistleblower Aid founder and chief disclosure officer John Tye, who is representing Seligman.

"Eric Garcetti knowingly allowed his top lieutenant to harass, assault and bully people in his orbit, not just once but repeatedly and flagrantly. Then he lied about it, under oath, repeatedly. We call on law enforcement to prosecute these crimes, and for Senators to block this nomination."

Seligman claims Jacobs sexually assaulted her in City Hall in April 2016 when he allegedly "forcefully grabbed her lower back, pinned her arms down, pressed himself against her, and held and kissed her for an extended amount of time," according to the complaint.

The document contends that Seligman notified the mayor's former chief of staff Ana Guerrero, who the complaint said "did not act surprised" and allegedly said that "no complaints would be tolerated because Mr. Jacobs was important to the mayor."

According to the complaint, in July 2016 the mayor emailed his staff from a personal account that Jacobs would be taking a leave of absence to work on civic and political matters, but that Jacobs "continues to be a dear friend, and one of (his) most trusted advisers."

The complaint notes several allegations against Jacobs, including one in 2017 in which the mayor was allegedly present. According to Seligman, the mayor's then-chief counsel Julie Ciardullo was in an elevator with Jacobs and Garcetti when "Jacobs blocked her into a corner and started pushing into her, back and forth, and she was asking, begging Jacobs to stop, and just kept pushing into her, pushing into her, and finally, the mayor had to intervene and tell him to get off of her." That allegation was first reported in June 2021, when The Times obtained Ciardullo's deposition, which includes the allegation.