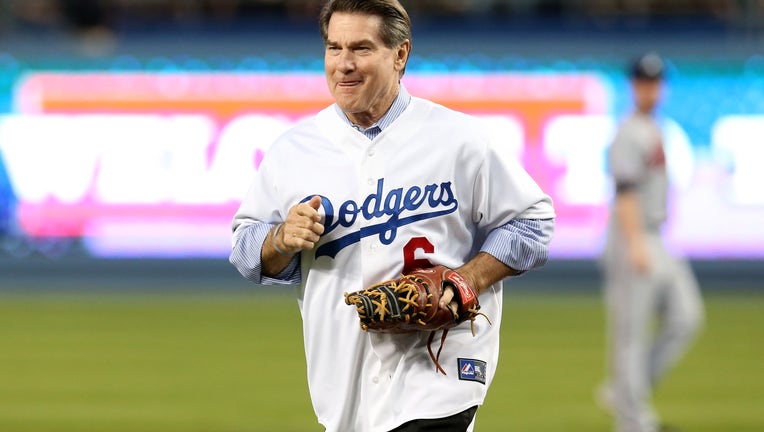 LOS ANGELES, CA - OCTOBER 07: Los Angeles Dodgers legend Steve Garvey throws out a ceremonial first pitch before the Dodgers take on the Atlanta Braves in Game Four of the National League Division Series at Dodger Stadium on October 7, 2013 in Los An

LOS ANGELES - Former Los Angeles Dodgers first baseman Steve Garvey is among nine former players and one late executive who will be considered for election to baseball's Hall of Fame Sunday.

Each person on the Modern Baseball Era ballot needs to receive at least 75% of the votes from a 16-member committee to be elected to the Hall of Fame. The committee members will cast their votes at baseball's winter meetings in San Diego.

The closest Garvey came to being elected to the Hall of Fame by members of the Baseball Writers Association of America was in 1995, his third year of eligibility, when he received 42.6% of the vote. He received over 40% two other times.

Votes from 75% of those voting is required to be elected to the Hall of Fame.

Garvey was the National League MVP in 1974 and MVP in the NL Championship Series in 1978, the second year it was awarded.

The first 1,107 games were with the Dodgers and the final 100 were with the San Diego Padres, where Garvey completed his career from 1983-87.

Garvey made the first of his 10 All-Star Game appearances in 1974 when he was elected as the NL's starting first baseman as a write-in candidate.

He was selected as the game's MVP for going two-for-four with an RBI and scoring a run. He was also the MVP of the 1978 All-Star Game.

The other former Dodger on the ballot is Tommy John, who pitched for the team from 1971-78, part of a 26-season career in which he won 288 games, 26th most in baseball history. All but two of the pitchers ahead of John are in the Hall of Fame.

John was also among the 2017 Modern Baseball Era candidates who failed to receive at least seven votes. He received his highest percentage of votes from baseball writers in his final year of eligibility, 2009, 31.7%,  the only time he topped 30%.

The ballot also includes Dwight Evans, who attended Granada Hills and Chatsworth high schools before becoming one of 34 major leaguers with at least 1,300 runs scored, 1,300 RBI and 1,300 walks, and the late Marvin Miller, who headed the Major League Baseball Players Association from 1966-82.

Figures from the Modern Baseball Era are considered twice in a five- year period for election to the Hall of Fame. They will next be considered in 2022.

Individuals whose greatest contributions to baseball came from 1950 to 1969, what the Hall of Fame defines as the Golden Days Era, and before 1950, the Early Baseball Era, will be considered for the Hall of Fame next year.